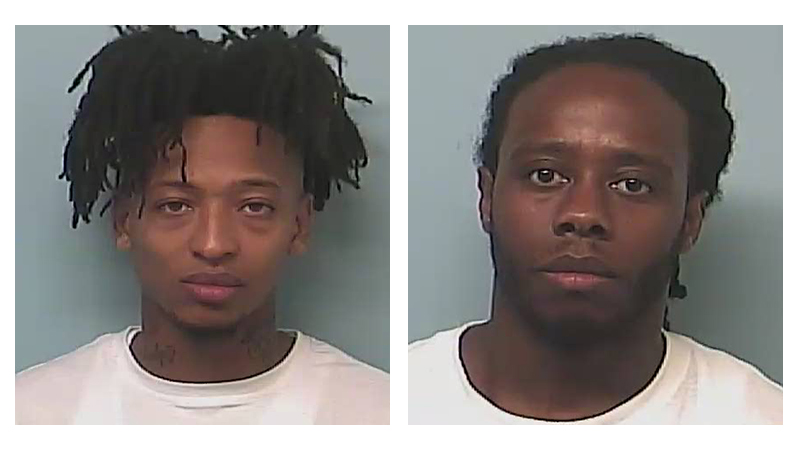 Gary Dennis (left) and Antendus Dennis (right) have been arrested on numerous drug and gang charges.

An alleged LaGrange gang leader and two other men have been arrested on numerous drug and gang participation charges following the raid of a house on Cooley Road.

Following a multi-week investigation, Antendus “Trezzo” Dennis, 32, believed to be a founding member of the FMG, or “Familia Gang” or “Familia Music Group,” was charged with obstruction of a police officer, two counts of participation in a criminal street gang and possession of marijuana with intent to distribute, according to a news release from the LaGrange Police Department.

Shamiya Cameron, 32, was charged with six counts of participation in criminal street gang activity, obstruction of a police officer, and possession of cocaine, methamphetamine and Xanax with the intent to distribute.

The LPD’s drug investigation started on July 20, when Antendus Dennis and Gary Dennis were arrested in the area of Carver Street. According to the press release, the vehicle they were traveling in at the time was searched and officers found a substantial amount of marijuana, consistent with the distribution of marijuana located in the vehicle.

Gary Dennis was also found to be in possession of a firearm during this stop, and a subsequent search of his residence revealed another handgun that had been reported stolen during a burglary within the City of LaGrange, according to the LPD. As a convicted felon, Dennis was not allowed to possess a firearm.

As a result of this arrest, the special investigations unit also began an investigation into Gary and Antendus Dennis’s involvement with FMG, a known criminal street gang within the City of LaGrange, according to police. FMG gang members have been convicted of various participation in criminal street gang activity charges in LaGrange over the past six years, according to the press release.

The Special Investigations Unit secured a search warrant for Antendus Dennis’ residence of 208 Cooley Road. When police arrived, Antendus Dennis attempted to flee the scene by running from officers but was apprehended after a short foot pursuit, according to the LPD. Shamiya Cameron was also at the residence at the time. Cameron fled from officers and ran back into the residence where he attempted to discard of crack cocaine that appeared to be packaged for resale, according to the press release. A subsequent search of Cameron’s vehicle also reportedly revealed that he was in possession of crystal methamphetamine and Xanax also packaged for distribution.

As a result of the execution of the search warrant, the special investigations unit was able to obtain a plethora of gang related information all related to the criminal enterprise known as FMG. This evidence located showed that Antendus Dennis was not only a member of FMG, but one of the founding members of FMG and showed his deep-rooted involvement with this enterprise, according to the LPD.

The Special Investigations Unit also recovered more than $16,000, believed to be proceeds of criminal activity (narcotics sales) associated with the criminal enterprise known as FMG. The investigation is ongoing and more charges are possible for these individuals and other members of FMG. Anyone with information about this incident is asked to contact the LaGrange Police Department at (706) 883-2603 or Troup County Crime Stoppers at (706) 812-1000.

City of LaGrange interns reflect on what they love…