Dancing for The Thread raises more than $70,000 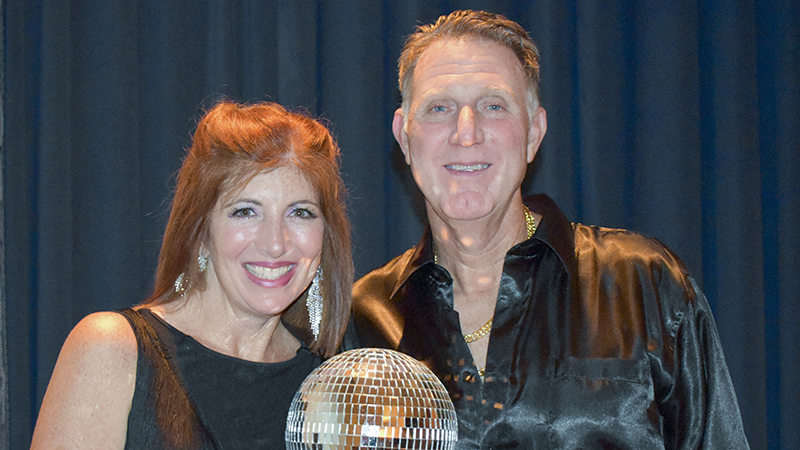 On Saturday night, six pairs of dancers put on their dancing shoes and raised $73,466 for the construction, maintenance, safety, expansion and use of The Thread at the second annual Dancing for the Thread.

Stacey Hardigree and Craig DeLoach took the disco ball trophies home from Del’avant on Saturday with their disco dance routine, but they said the real winner of the night was The Thread, a sentiment shared by many at the event.

“The community loves The Thread, and I think our community loves to come together for things like this, where it is just a way to give back to a great little city and then to have fun too,” Hardigree said. “This whole dance party is amazing. Everybody is having a great time. The crowd was wonderful. It was so much easier than I thought it would be because of the crowd.”

Dancers’ final scores were determined by a combination of scores from a panel of judges and votes cast online and in person. Votes cost $1 per vote, and the roughly 4,500 views of the event’s lived stream on Facebook likely had an impact on online voting.

Hardigree said that they worked hard to prepare for the competition, meeting at 7:30 a.m. every morning through the summer to practice. Other dancers relayed similar experiences, and that practice paid off for The Thread.

“I didn’t think we could top last year, but we exceeded last year,” said Natalie Hale, the executive director of the Friends of the Thread. “The dancers danced their hardest out there. The support for the dancers was incredible, and it came down to the wire. It was great, especially on a night when Sweetland had a huge concert. We had a full house, and people really had a good time, and they were supporting The Thread the whole time.”

Event organizers attributed the widespread support of The Thread to the fact that it is open and accessible to everyone in the community.

“The Thread has been embraced by the people of LaGrange as a recreational amenity, as a promoter of better health and as a way to be outdoors and to appreciate nature,” LaGrange Mayor Jim Thornton said. “I’ve been impressed with the diversity of those who use The Thread and who support it. Both physically and socially, The Thread has become a unifying force in our community, and I believe that will only continue as more miles are added.”

Once complete, The Thread will be 29 miles long, and the Friends of the Thread hopes to have 13 of those miles completed by 2022. Currently, there are three completed segments of the trail, including the Model Mile at Granger Park, the Calumet segment and the Broad Street connector. Construction is currently underway on the Country Club segment.

However, support for The Thread goes beyond its miles of exercise space. According to Council Member Mark Mitchell, the multi-use trail also has a positive economic impact on the city.

“One thing I’ve learned on city council is — when our economic development people are trying to solicit these companies to bring hundreds of thousands of jobs in — it is a checkmark on the list for a benefit to our city,” Mitchell said. “It helps promote and sell those jobs.”

To learn more about The Thread, where it is located or how to support it, visit Thethreadtrail.org.