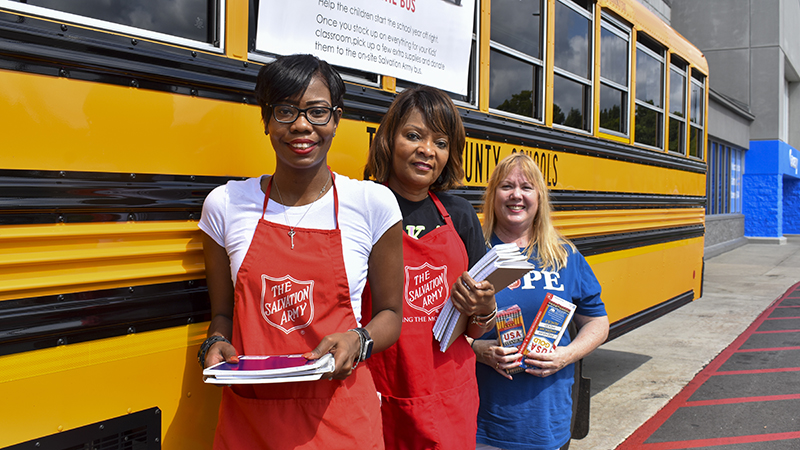 It was too warm for even a Georgia winter, but there was still a hint of the generosity of the Christmas season at the Walmart on New Franklin Road Saturday morning.

Salvation Army representatives stood by with kettles and donation boxes as locals donated to local children, but instead of the Christmas presents usually seen in December, Saturday’s donation bins were filled with pencils, paper, notebooks and other school supplies for Troup County students.

“We are here to stuff the bus with school supplies for children that don’t necessarily have enough to go to school,” said Bill Young, an advisory board member for the Salvation Army in LaGrange. “People have been most generous with taking these fliers to purchase items from Walmart and also generous to donate cash into our Salvation Army red kettle.”

The volunteers and Salvation Army in LaGrange board members at the event said that they had heard about the struggle that many parents face in buying the supplies that their children need for school, and they hoped the donation event would help prepare those students for the upcoming school year.

“We are here to collect school supplies because we know there is such a need within our community where parents can’t afford school supplies,” said Sandra Thornton, advisory board chairman. “In this day and time, the list that comes from the schools are great because you don’t expect the teachers to have to pay, but we know that not all children can pay for supplies.”

Thornton said that because children are the future of the community, helping them is a top priority.

“I’ve heard so many people — who are with different churches and different organizations who are collecting supplies — say that the demand is so great at this time, and I don’t know what is triggering that,” Thornton said.

Martin said that she began receiving phone calls asking about how children could get school supplies even before the drive began on Saturday.

In addition to helping local students, the event also gave the Salvation Army in LaGrange’s representatives a chance to talk to shoppers about the other services offered to the community, like resume assistance, utility assistance, food and clothing.

Young said that one of his good friends received assistance from the Salvation Army when he lost everything to a natural disaster, and he said he hoped the event would remind people that the Salvation Army is there for people in need year-round.

Those who didn’t have a chance to make it by on Saturday can still donate school supplies for local students this week at 202 Church Street in LaGrange.

“They can come to the store between 10:30 a.m. and 3:30 p.m. Monday through Saturday this week to drop off more school supplies,” said Lisa Martin, the service center director for the Salvation Army in LaGrange.

According to Martin, the school supplies will be distributed to schools throughout the county by the Troup County School System.

Representative Drew Ferguson speaks with local businesses on the…