Man thanks first responders who saved his life 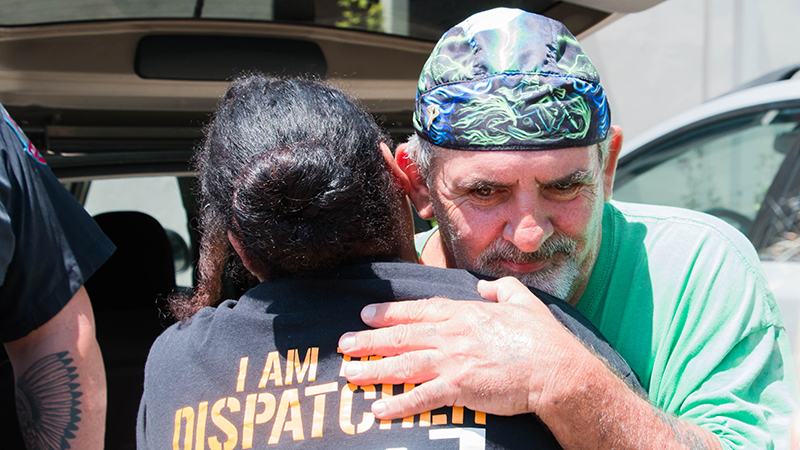 On July 25, Mike Pilgrim, 54,  was electrocuted helping a friend cut down a tree and was found unresponsive on scene. On Thursday afternoon, Mike, alive and recovering, was reunited with those who played a part in saving his life two weeks ago.

“I was throwing a cable over a tree limb and evidently it missed the limb and hit the transformer,” Mike said.

Emotions ran high as Mike was greeted and hugged by each American Medical Response (AMR) medic, police officer and 911 dispatchers that played a role in saving his life.

“Like I told you that day, you’re a lucky man,” said Retosha McKenzie, advanced EMT with AMR Medical Unit 88. “There was a higher power looking over you.”

Mike said that he did not have much memory from the whole event, except for small flashes here and there.

“There was a buzz of the transformer going off and seeing all different colored lights,” Mike said. “Mark (Wright) started CPR, him and his daughter. They kept me going until they (the medics) got there. My first memory was touching down at the hospital and the helicopter touching down.”

The electrical current went through Mike’s left hand and came out of his toes. In the process, Mike lost two toes, injured his hand and spent a week in the hospital.

“The rest of me is busted up, but they went in and sewed me back up,” Mike said. “They did real good. They wanted to keep me longer, but I wanted to come home.”

When Mike and Mark started their day cutting down the 75-foot poplar tree, Mike’s wife, Tonya, said she never thought this was going to happen.

“At the time, I wasn’t really worried about it because he has done it before,” Tonya said. “Nobody knows how I appreciative I am, and I thank all of you.”

McKenzie said Mike being alive is due to the actions of everyone involved.

“From those who called 911, the 911 operators, the bystanders who started CPR to begin with, to everybody,” McKenzie said.

When medics arrived on the scene, Mike was pulseless and not breathing.

“Thankfully this case worked out well,” said Timothy Willey, medic with AMR Medical Unit 88. “Mike’s made a good strong recovery, and we’ve become friends and stayed in touch and plan to do so going forward.”

Now, two weeks later Mike said there will be some changes in his life.

“I just want to be more careful and try to be a better husband,” Mike said. “Live life to the best.”