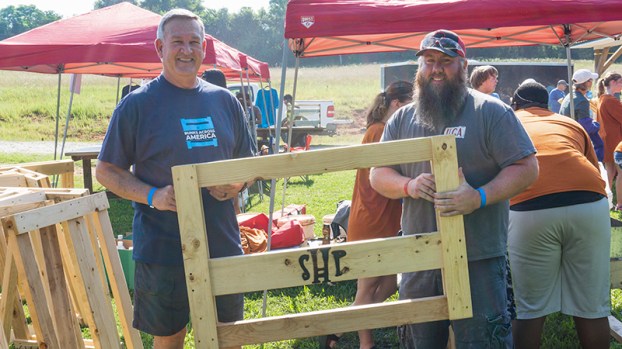 Sleep in Heavenly Peace LaGrange chapter president Gregg Watts, left, and Brian Evans hold one of the many headboards that will attach to one of the 80 bunks beds built on Saturday. (Jenna Oden | Daily News)

Sleep in Heavenly Peace, a local nonprofit, will hold its next build day on Aug. 17 at Sweetland Amphitheatre.

SHP is a nonprofit group of volunteers dedicated to assembling and delivering bunk beds to families in need, and a LaGrange chapter of the organization has been functioning for just over a year.

Greg Watts, the president of the chapter, said that nationally more than 8,000 bunkbeds have been built in 2019 and more than 320 children have been assisted through the builds.

Watts estimated that roughly 3 percent of any county’s population can experience a bed shortage, and the SHP of LaGrange is constantly working to help families in need.

“We’re probably averaging one [bed-building session] every other month, but it kind of runs in cycles,” Watts said. “We take money people and businesses have donated and invite the community to come build. We’re pretty flexible of what we can do.”

Watts says that out of the 7,000 volunteers the organization has accumulated since its opening, the majority of them are women who bring their children to help with the bed-building.

The upcoming build session will feature a guest appearance from the founder of SHP, Luke Mickelson, and his wife. To volunteer, donate or request a bed, visit shp.org.

On Thursday, the LaGrange Housing Authority gathered on Jordans Way, off Ragland Street, to break ground on a new housing... read more