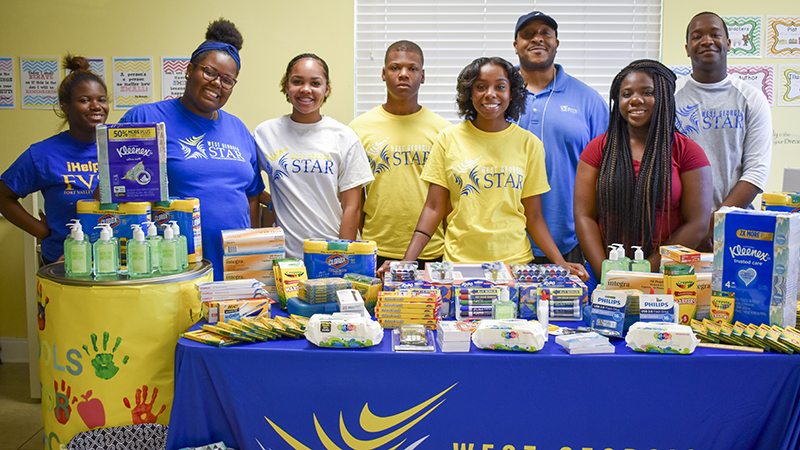 This summer, a group of college students taking part in the summer program at the LaGrange Housing Authority teamed up to gather school supplies for Troup County educators.

The group said that they wanted to help teachers, who often step up when students don’t have the school supplies they need to succeed.

“We recognized that there is a great disparity between the supplies that the students bring in to the school year and the amount that teachers have to pay for themselves,” said Briya Todd, who planned the project. “We wanted to make up for that disparity because we don’t feel that teachers should have to come out of their own pockets to pay for school supplies that should be a given for the students. So, that is where the plan, Tools4Teachers came from.”

The group asked for donations from the community and spent time at Staples gathering donations after the drive started on June 18.

“[We were] at Staples mainly, and everyone else brought supplies over,” said Braelyn Dozier, who organized donations.

The students said that a lot of people who they spoke to were excited to help.

“The teens in the program contributed a lot of supplies,” Todd said.

“We also had outside organizations donate supplies. Jackson Services is actually our partner on this project. They contributed the initial contribution for the project, which was basically over half of the supplies that we got.”

Jackson Services also donated to boost a video advertising the school supply drive on Facebook, and the LaGrange Chapter of Omega Psi Phi donated to the drive as well.

“Everybody has been extremely excited about it,” said Chad Cooper, director of operations for the LaGrange Housing Authority. “This is something that we want to continue going on from year to year. We feel like this could be huge. The more it gets out there, the more teachers we can help. We can start taking donations earlier. That is what we want to do from now on.”

The school supplies went to one teachers at every elementary and middle school in Troup County, and Todd said the recipients of the supplies were chosen by their peers, with factors like number of years teaching and contributions to the schools.

“Your child’s favorite teacher is having to come like $500 out of pocket every year just to pay for school supplies, and we want to make sure that parents recognize the need for the teachers,” Todd said.

The students said to look for the Tools4Teachers supply drive again in 2020, when they hope to help even more local teachers.