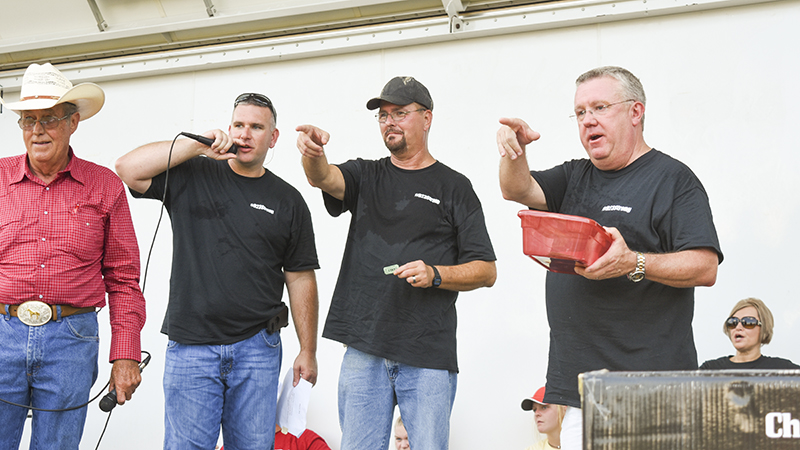 Hundreds of community members participated in a benefit ride Saturday for Billy Baker, a deputy with the Troup County Sheriff’s Office who was recently diagnosed with cancer.

Baker has stage four esophageal cancer, which affects his esophagus, lymph nodes and other areas of his body. Saturday’s event at The Elks Lodge raised money to help with Baker’s medical bills, which are already into the hundred thousand.

“It’s been overwhelming to say the least. I always thought of myself as the guy on the job, and I’ve been doing the job a long time,” Baker said. “For the community and my brother and sister officers to show up and do this it has been overwhelming for me. This is unbelievable.”

There were a total of 853 riders in Saturday’s event, according to Lt. Nathan Taylor. Taylor gave credit to the entire narcotics division of the TCSO for their work in organizing the ride.

“It was a big undertaking, but it was very rewarding to see what we saw today,” Taylor said.

All of the riders pulled out of the Elks Lodge at 11 a.m. and rode for about an hour. Following the ride, a lunch was served and items were auctioned to raise more money for Baker. Among the dozens of items auctioned off was a football signed by Miami Dolphins great Dan Marino and boxing gloves signed by Joe Frazier.

Sgt. Stewart Smith, public information officer for the TCSO, said the event raised more than $24,000 and that an account has been established in Billy’s name at Colony Bank in LaGrange.

Regardless of the final total, Baker said it’ll go a long way for his medical bills.

“It is going to help me tremendously,” Baker said of the money raised. “We are already over $200,000 down in medical bills, and we are doing the best we can.”

Baker said he was feeling OK on Saturday after undergoing chemotherapy on Friday.

“They are very aggressive in going after this. The chemo is rough,” Baker said. “It makes it nauseating. You good days and you have bad days.”

“You can talk about it all day long but when people show up and show out like they did today that proves to him that he has really made an impact on this community,” Woodruff said. “People want to come out and thank him for what he’s done and encourage him because we believe he’s going to beat this cancer.”

Baker has worked for the TCSO for four years after retiring from the city of LaGrange.

“This is a celebration,” Baker said. “This is what people do that care, and I never realized so many people in this community care so much, and it’s very clear that they do.”