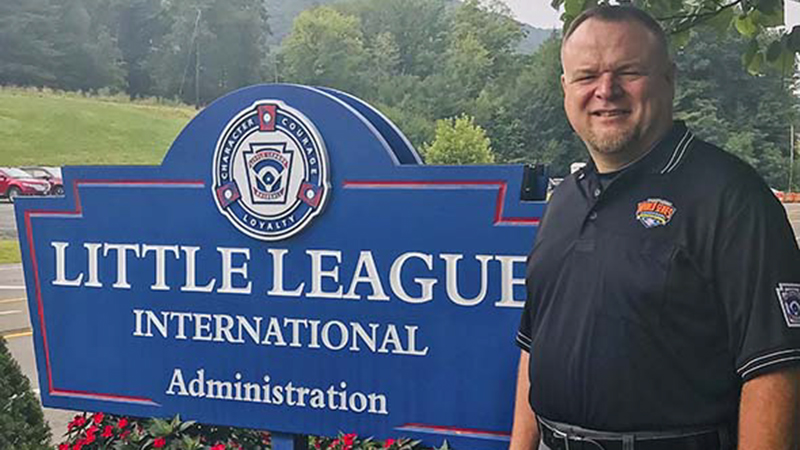 BIG STAGE: Little League umpire and Lanett High School graduate Marty Henry has applied to work the Little league World Series for the last four years before being selected in January. Umpires have to work at their local leagues, district and state tournaments before being graded at regional tournaments and receiving a recommendation to apply for the tournament. Photo submitted

WILLIAMSPORT, PENN. — One Valley native has the opportunity to live out a career-long dream in the next 11 days.

In January, Marty Henry, a former longtime Lanett resident, opened up an envelope that enclosed the golden ticket informing him that he was selected as one of the 16 umpires who are working this year’s Little League World Series.

It was a lifelong dream, but a recent health setback had him worried he wouldn’t actually make it to Williamsport.

In late December, Henry felt some pain on the left side of his body and his wife Jennifer urged him to go to the doctor to get it checked out.

Henry said he brushed off his wife’s advice because it only lasted for 10 minutes. He also had a history with having kidney stones, and he’d figured that this was just another case of one.

In early March, Henry listened to Jennifer’s advice and got himself checked out by a doctor. The doctors originally believed that it was a kidney stone as well. Henry got a CAT scan trying to locate the kidney stone on the left side and, in the process, found a cancerous tumor on his right kidney.

“It was a God-wink thing for that to happen,” he said. “I think God was blessing me in getting me to go to the doctor.”

On April 9, Henry’s right kidney, ureter and part of his bladder was removed.

A couple of days before the World Series orientation, Henry had a follow up with his doctor and was ensured that everything was cleared up and ready for him to return to umpiring.

Henry has been an umpire since he was in the eighth grade, and he has returned to call games from behind the plate for the last decade after his son was done playing little league.

“I’ve always loved it,” Henry said. “One day, you won’t be able to play, but if you umpire, you can stay involved with the game for a long time.”

To become a Little League World Series umpire, officials must start at their own local leagues, attend state and region training, go to umpire school, work district and state tournaments, then you apply to umpire the region tournament. The umpires are graded at the regional tournament, and if the performance was acceptable, then the official receives a recommendation to apply for the World Series. Henry has applied for the World Series for the last four years.

“When you get that letter, it’s just incredible,” he said. “It was an emotional thing because it was a goal that I set and I worked so hard, so many years to get it. When I got the letter that I was going, it left me speechless because you’re so excited.”

When he graduated from Lanett High School in 1985, his original dream was to one day become a Major League umpire, but he ended up trending toward becoming a physical therapist assistant after receiving his degree at UAB.

Henry has kept up with all of the happenings back in his hometown, including the Valley 9 and 10-year-old baseball all-stars who recently won the Dixie Youth Division II AAA World Series.

“It’s great for those kids,” he said. “It’s great for the Valley. Those kids are playing, that’s what’s important. Get out and play sports, move around, be active and learn to love the sport, love baseball in particular. Congratulations to those guys for doing that. That is a huge accomplishment and something that they should be greatly respected for doing. That is incredible for them to win that.”

In addition to promoting youth sports, Henry said that he hopes his story inspires men in a different way as well.

“As men, we think we’re 10 feet tall and bulletproof, and we’re not,” he said. “When your body does something that is not normal, it’s your body’s way of trying to tell you that something’s not right. You need to pay attention to that and get that checked out. If my wife hadn’t urged me to do that, then who knows what the outcome would’ve been.”

The Little League World Series begins on Aug. 15 and continues through Aug. 25.