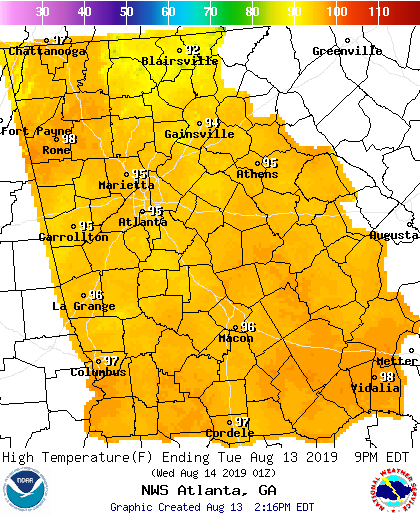 A heat advisory in effect for portions of central and northern Georgia is expected to be lifted by Thursday.

Lauren Reaves, meteorologist with the National Weather Service in Peachtree City, said that while the advisory is in affect until Tuesday evening, one is unlikely to be issued on Wednesday.

“We are expecting another hot day [Wednesday], but we are not issuing another heat advisory at this time,” Reaves said. “As far as the rest of the week, [Troup County] is not looking as warm. After Wednesday, the heat advisory should be under 100 degrees.”

A heat advisory is when a period of dangerous heat is expected. The combination of hot temperatures and high humidity can create heat index readings of at least 105 degrees and very warm overnight temperatures.

To combat the heat, Reaves recommended avoiding strenuous outdoor activities during the hottest parts of the day, which she said was typically around 3 p.m. Those who work or play outside should avoid direct sunlight and take frequent breaks in shaded areas. Reaves said they should also drink plenty of water, wear light, loose layers and apply sunscreen as needed.

Never leave children or pets in a locked car, even if a window is down. Temperatures in cars can rise as much as 30 degrees in under 15 minutes, even in the shade.

Reaves said it is important to understand the difference between heat exhaustion and heat stroke.

According to the Center for Disease Control and prevention, heat exhaustion is the precursor to heatstroke and is a direct result of the body overheating and can be identified by heavy sweating, rapid pulse, dizziness, fatigue, cool, moist skin with goose bumps when in the heat, muscle cramps, nausea and headache. Heat stroke symptoms arrive when your body temperature rises to 104 degrees or higher. At this temperature, the body’s organs can become damaged, leading to serious complications or death.