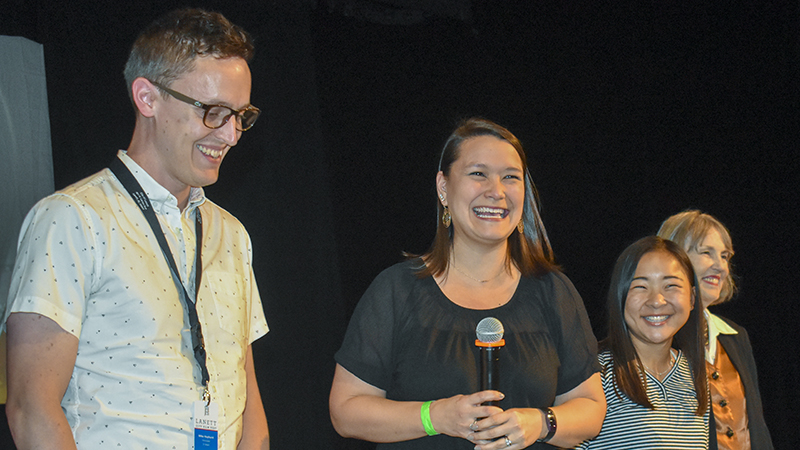 LANETT — Two days and 70 films later, the organizers of Lanett Film Festival feel great about how the weekend went.

This was the third year for the film festival showing films at New Horizon Theatre in downtown West Point, Lanett City Hall and the Jane K. Farrar Event Center in downtown Lanett. Lanett Mayor Kyle McCoy said this year was the festival’s best year yet.

“We had good crowds and especially at New Horizons and different venues throughout the day,” he said. “Overall, I was very pleased, and it seems that each year, we are getting more participation.”

He said he hopes the festival will continue to build upon itself each year.

Starting Friday night at New Horizon with a block of short films, including one by LaGrange native Zeke Weldon, the film festival embarked on a two-day binge session of short films, documentaries and some feature films.

Weldon kicked off the film with his short film “Treasure We Find.” He said the film is centered around two men named Gary and Malcolm who go on a treasure hunt and has a twist ending. The film was shot in downtown West Point.

“It is a good outlet,” Weldon said of the film festival. “I am learning a lot of networking with great people who are giving good advice.”

Weldon has acted in a few short films while at Auburn University and has been involved in community theater in LaGrange. He’s had the itch to try and make a film, so he was able to get a crew together to submit “Treasure We Find.”

He said directing instead of acting was about trusting himself and his vision for the film and not being afraid to try something new.

When he saw the final cut of his film, he called it surreal.

“There was a moment when we were filming where I said ‘wow, this came from my imagination that went to a page, then to the screen, and now it’s an actual product,” Weldon said. “So, it was cool to see the product from start to finish.”

Eric Wright, the festival coordinator, echoed the McCoy’s sentiments saying it was the festival’s best year. He said about 100 people attended the festival, which is a good number for a small festival.

“So many people came out to support filmmakers from this area,” Wright said. “We are getting it right. We really need to get the word out a lot more.”

Wright and his staff received 500 submissions before narrowing down the festival to 70 films. The number of films wasn’t necessarily significant, but it was about the time allotted for the festival.

“You are always fighting against time,” Wright said. “However, I have a great team, and it takes a good one to put all this together.”

He said the talent in East Alabama and West Georgia is abundant, and he hopes it will only make the festival better throughout the years.

“There is a moderately untapped talent pool here,” he said. “We really need to tap into that talent and get them to submit their films and participate.”

At the end of the night, the film festival hosted an awards show. One of the awards handed out was the City of Lanett Award People’s Choice. It was determined by a Facebook vote by those who watched the film.

Huntsville native Allison Hayhurst and her husband Mike Hayhurst won the people’s choice award for their film 15 Down.

Allison Hayhurst said the inspiration for the film was based on her relationship with her grandmother and reflecting on their relationship when she was a teenager.

“And what it was like to have three generations of women growing old and growing up at the same time,” she said. “And just how quickly life can change when you think you found your new normal.”

The film was shot in Huntsville in four days.