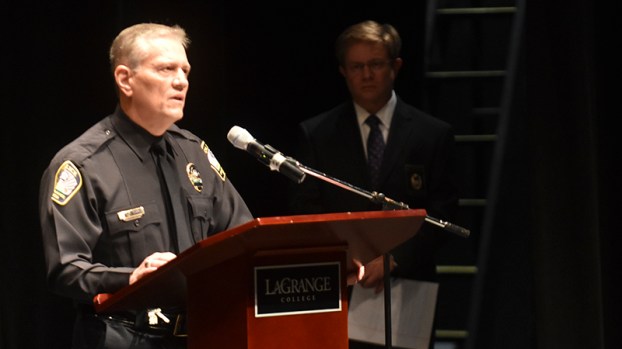 Reconciliation between Georgia law enforcement and minority communities took another step forward over the weekend.

“This entire initiative is important for us collectively as Georgians and for our collective history,” Georgia Attorney General Chris Carr said Saturday.

“There is a powerful movement that is happening across the nation between minority communities and law enforcement, and I am pleased that it is making a stop today in LaGrange, Georgia. It is actually more accurate to say it is being led from LaGrange, Georgia.”

The event included panels on topics including current efforts to address harm, trust-building goals, personal experiences with historical harm, law enforcement’s role in addressing race and history, the importance of understanding and acknowledging harm and the efforts that have been made in LaGrange. Speakers included NAACP representative Ernest Ward, Debra Tatum (family representative of Austin Callaway), former Georgia Rep. Carl Von Epps among other notable speakers. From the beginning of the conference, leaders clearly established its purpose.

“One of the fundamental premises of the Trust Initiative is this — America’s criminal justice apparatus will never again allow an unjust majority to overpower an unpopular minority under the color of law,” said Wade Carpenter, the fourth president of the International Chiefs of Police. “We pledge anew to the communities we are sworn to protect, and we will do that. We will protect.”

Several speakers acknowledged that trust is required for good policing.

“Last year, the public confidence level [in police] was 74 percent. When I looked at the African American segment of that poll, it was 51 percent,” LPD Chief Lou Dekmar said. “When I look at every poll regarding public confidence in the police, marginalized communities are always half of what the general poll population is. My point is, community trust is imperative to public safety, and in some quarters of the cities we serve, that trust does not exist.”

The event was also a chance for representatives to recommit their agencies to serve all the people in their community.

“The GACP is proud to say the state of Georgia is taking a leadership role in addressing historical harm of racial minorities and transforming relations police departments have with our communities,” said Wesley Walker, president of the Georgia Association of Chiefs of Police.

Part of that commitment meant looking at past actions.

“Everyone in this room today and in our communities are seeking the same things — to be safe in our homes, our schools, our place of business and recreation,” Walker said.

“We want to be respected as individuals, and we want our children to have a better life. We want to ensure justice is administered fairly and impartially. However, this has not always occurred.”

Dr. David Kennedy, the director of the National Network for Safe Communities, said that as trust and belief in legitimacy goes up in the public view of law enforcement, crime goes down, meaning that trust is essential to law enforcement being effective, which has been one of the stated reasons why the LPD has put a focus on historic actions. Dekmar took part in one of the most famous apologies in the country in 2017, when he apologized to Austin Callaway’s family for the police department’s role in his death in 1940.

“The difficult work of building trust across racial lines cannot be done in marginalized communities unless we understand the impact of history,” Dekmar said. “This work requires people who sometimes share little in common. Liberals and conservatives, Democrats and Republicans, progressives and traditionalists — we are still willing to work together because as different as we may be, we are united by a common purpose. That is to improve the future of the community.”

However, speakers also acknowledged that racial trust was fractured long before Callaway’s time.

“We are remembering this month the 400th anniversary of the first slaves that were delivered by a Dutch ship to Virginia in 1619,” LaGrange Mayor Jim Thornton said.

According to Walker, following the conference, the police departments participating planned to begin developing plans for implementing the program in their communities on Sunday.

The City of LaGrange is looking at creative ways of encouraging redevelopment of properties in the city, and on Tuesday,... read more