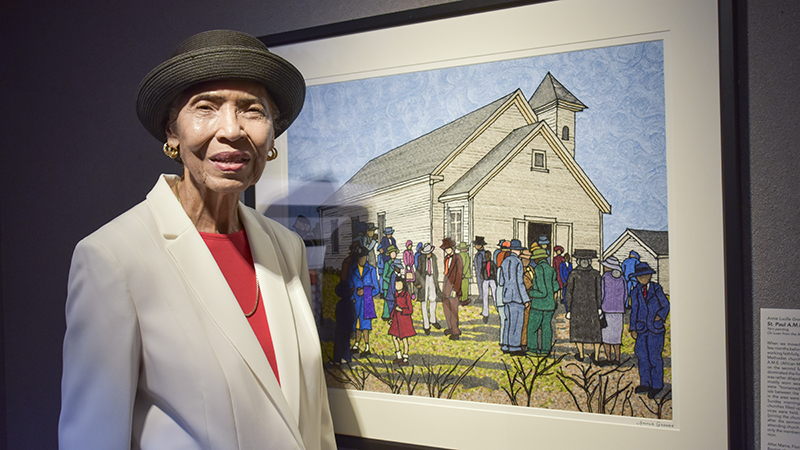 The LaGrange Art Museum got an early dose of yarn-bombing on Friday, in honor of the Visual Artists Alliance of LaGrange (VAAL) art show running side-by-side with famed yarn artist, Annie Greene’s work.

The exhibits will remain on display at the museum through the Rockweave festival, which will also feature plenty of knit and crocheted pieces covering trees, signs and railings. The outside décor was just the tip of the iceberg, as museum visitors were treated to a variety of works by talented local artists including graphite sketches, oil paintings and Greene’s signature yarn art.

“Now is the time for you to support the artists who live among us and upgrade the art in your home or add to your collection,” said Ethyl Ault, board chairman of the art museum. “The local artists’ work is nothing short of exceptional.”

Almost all of the VAAL works are available for purchase, and VAAL President Thea McElvy said that she had seen massive growth on multiple levels among the group’s membership in the last year.

“They’ve just grown so much professionally and artistically, and we’ve got so many new members now,” McElvy said. “We have one new member that actually placed tonight, Cathy Wiggins. It is good to see people going ahead, getting the courage up and joining and showing what they can do. A lot of times they can do a lot more than they think.”

Best of Show winner, Sarah Scarborough Swanson, was recognized with awards at the opening reception for VAAL exhibition. The Suffering Artist Gallery owner and artist submitted a graphite and ink piece on panel entitled “A Peek for Twenty Pesos.”

Greene’s “Georgia Farm Life in the ‘40’s: The Farm in Yarn” fills the second floor of LAM, and she said that it is the second time that she has exhibited at the same time as the VAAL show.

“I’m just delighted that they gave me this opportunity,” Greene said.

Her collection pulls from her personal experiences, telling rarely seen stories of the not-so-distant past.

“I had been thinking about it a long time, and I went in different directions,” Greene said. “Eventually, I decided I think I want to write about what I witnessed as a child growing up even into my adulthood, so these are some of the things that I encountered.”

Greene encouraged people to bring children to the museum, which is free to the public, although donations are encouraged.

“I just wish people would read more and make sure they come out and bring the children,” Greene said. “I’d like to see more children at these exhibits.”

Judging the show was Columbus State University professor Joe E. Sanders Jr. He is known for his work in printmaking, book arts and handmade paper. He has studios in Columbus, Georgia and Dog Island, Florida.

McElvy said anyone interested in joining VAAL’s group of beginners, emerging and professional artists, can contact her at thea.mcelvy@gmail.com.

Volunteers gather at Sweetland to make beds for local…