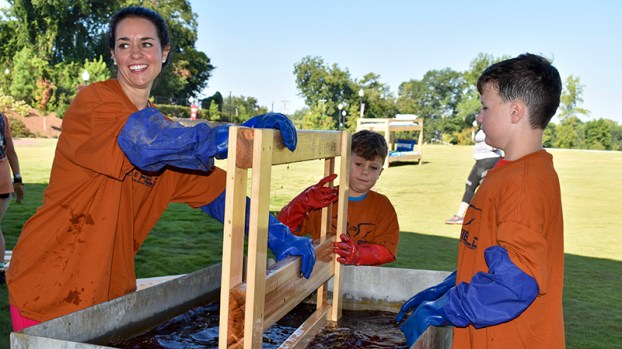 Volunteers gather at Sweetland to make beds for local children

There’s 410 down, and more than a thousand left to go.

On Saturday, roughly 200 volunteers gathered at Sweetland Amphitheatre to build beds for local children without a place to sleep. The bed build is part of a nationwide effort by Sleep in Heavenly Peace, which has been operating in Troup County since July 2018.

“We’ve done 320, and they are all delivered,” said Greg Watts, the chapter president of SHP. “So, that is 320 children since the fourth of July last year. … [Today we’re building] 90, and we’ve got 78 children waiting. So, after today, we really won’t have any inventory. We are always behind.”

The children receiving beds are recommended through school counselors, referrals, churches and sign ups on Sleep in Heavenly Peace’s website, and the beds built at the Troup County event stay in the Troup County area, with a few beds going to children just across the county line.

“Based on statistics, there are about 2,000 children that meet our qualifications,” Watts said. “We are just scratching the surface. Our goal when we started a year ago was about 80 beds, and we did 320 in a little over a year. So, it has been a lot bigger than we ever thought it was going to be.”

Luke Mickelson, CEO of SHP, said that any child who is sleeping on the floor or an uncomfortable situation is eligible to receive a bed.

“Because of the poverty rate inside the City of LaGrange, that really increases our numbers,” Watts said. “There is a story behind every family, and our focus is not on how people get there. Our focus is trying to see that children have a safe place to go to sleep.”

Watts said some of the children that have benefited from the builds were sleeping on inflatable mattresses, piles of clothes on the floor or with as many as four children in one bed. He said that some of the teachers of children who received beds reported that they had better focus after receiving their bed.

“A lot of people don’t realize that child bed-less-ness is a major problem, and people think that there is just no solution,” Mickelson said. “Sleep in Heavenly Peace is a solution to that, and we just want people to know that there is a solution. There is an opportunity to get kids off the floor.”

One of SHP’s biggest needs is volunteers, so the turnout for Saturday’s event excited organizers.

“It is a dream come true,” Mickelson said. “We set up Sleep in Heavenly Peace for communities to help themselves. When I used to volunteer back in my own hometown in Idaho, I always wanted to be part of something to help my fellow neighbors. It is just an amazing sight to see 200 people show up to help kids in their own town.”

Mickelson said that SHP makes 200 bunkbeds or 400 beds a week nationwide, making about 1,600 beds a month for children across the country. And despite the construction nature of the event, volunteers of all ages were able to take part, including members of more than a dozen local churches.

“We do have a core group, but most of these people are volunteering and seeing this process for the first time,” Watts said. “They’ve heard about it, but I’d just encourage people to come. The reason why we’ve done a big community event and done it downtown is so people can see what we do. A lot of people think it is a group of guys driving up in pickup trucks, and they are going to pull the tools off the trucks. We provide all the tools, all the safety stuff, and if you look around, we are about 50 percent women. We have a lot of kids. They’ve been putting bolts and things together.”

To learn more about Sleep in Heavenly Peace, visit Shpbeds.org.

Reconciliation between Georgia law enforcement and minority communities took another step forward over the weekend. On Saturday, agencies from throughout... read more