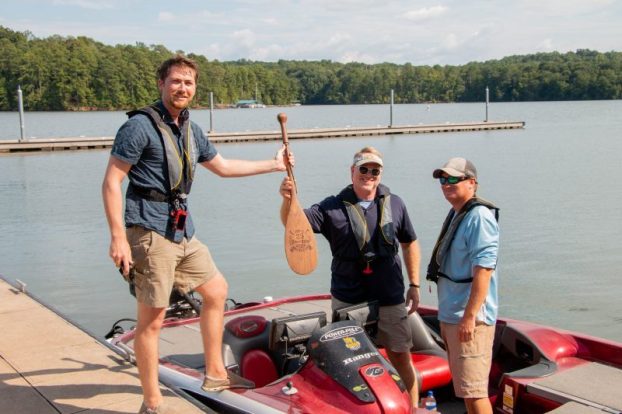 Relay Down the Hooch began in March as a hike  from north Georgia to the first point where the trail becomes navigable by boat.

The Chattahoochee Riverkeeper is celebrating its 25th anniversary with the collaborative 435-mile long, Olympic-torch-style river relay from the Chattahoochee’s down to the Florida border.

On Monday afternoon, the “torch,” a customized paddle, made its way 15 miles down West Point Lake from Brush Creek Park to Pyne Road Park.

Joined with Jacobs were West Point Water Coalition representatives Matt Headrick and Philip Ivey, who were chosen to carry the “torch” for its 15-mile journey down the lake.

“The coalition is a good partner that we have worked with for years,” Jacobs said. “They have done a lot of work working with local governments and businesses to promote West Point Lake.”

Ivey said that the mission of the coalition is to protect West Point Lake.

“We are the first body of water that catches everything washing into the Chattahoochee, so plastic and litter will manifest here,” Ivey said. “But over the past 10 years we have started seeing people look for places on the lake and see people getting out enjoying the lake.”

Over the past few decades, the lake has not had the best perception, according to Jacobs, due to litter and mistakes made in the past. But he said through all the work that is being done cleaning and promoting the lake, he is seeing it come back again.

“It only takes one day, or one negative even to lose the trust of the people. And 25 years to gain the trust and pride back,” Jacobs said.  “It took that one negative headline in the paper that raw sewage was entering the lake in the 80s to bring it down. But there is a lot better perception now than there was.”

The coalition and river keeper help keep water levels and water quality in check and constantly monitor it.

“The more people talk about the lake positively and promote it will help,” Jacobs said. “Littering is an issue, and it starts with the whole community.”

On the 15-mile ride down the water, Ivey pointed out the buoys along the way that help boaters identify where they are, especially at night.

“The Callaway Foundation have been awesome about supporting us with grants and helping us maintain the lights in the [solar] buoys,” Ivey said. “West Point lake is the hidden gem of the community.”

In the coming days, the paddle will make its next portion of the relay with another group until it reaches Florida by November.