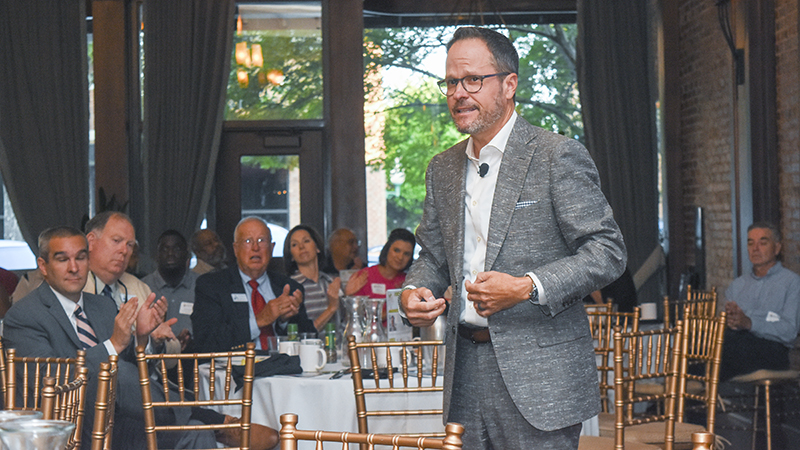 Chris Clark, president and CEO of the Georgia Chamber of Commerce, spoke at Tuesday’s Early Bird Breakfast and gave a glimpse at Georgia’s future, which is rapidly changing.

Clark spoke mainly on the challenges that employers will face as the world becomes more tech-dependent and millennials and gen-z workers make up a large portion of the workforce.

Georgia’s population is also expected to continue to grow, climbing to an estimated 12 million people in 2030.

“We also need to diversify the companies we have in Georgia,” Clark said. “We have a vibrant entrepreneur ecosystem in downtown Atlanta. They are creating dozens and dozens of companies every year. We need that same infrastructure in every community.”

Georgia also lags behind in the number of patents, ranking 32nd overall in state rankings.

“He who owns the patents owns the future, and we don’t own the patents right now,” Clark said. “We need more patent development out of our universities, our healthcare institutions, out of businesses and out of our small entrepreneurs in Georgia.”

Clark said while it’s nice that Georgia has been named the best state to do business six years in a row, he said he’s focused on the future.

“I’m worried about the next 20 years and where we’re going to be,” Clark said.

Clark said that 65 percent of the jobs future graduates will be applying for don’t exist today.

“Did a counselor ever tell you that you could be a drone delivery pilot?” Clark asked to laughter around the room. “The job didn’t exist 24 months ago, and now it’s one of the hottest jobs out there. That’s how quickly this economy is growing.”

Clark also talked about the changing worker and job landscape. He said 62 million Americans will be displaced from the workforce in the next ten years because of automation, with the hardest hit being anyone without a high school degree.

“We have to make sure we are preparing students, not for the jobs we think are open today but the jobs we haven’t imagined yet in the future,” Clark said.

Clark also spoke about the growing gig-economy, which focuses on temporary or part-time employment so that workers can juggle several jobs at once. He said 40 percent of Georgia workers will be in the gig economy next year.

“You have to prepare that they are not going to want just a full-time gig with just you. They are probably going to want three or four different jobs,” Clark said.

Millennials will make up 75 percent of Georgia’s workforce next year, according to Clark.

Clark said it’s important for Troup County to have a plan, so that it can ensure its preparing tomorrow’s students for success.