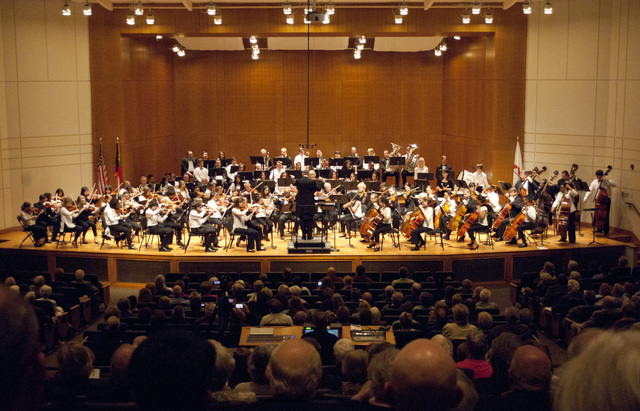 The LaGrange Symphony Orchestra will celebrate its 30th anniversary by playing its first show this season with a familiar set list.

“If people have never been to a symphony concert, this is the show they should come see,” said Raylene Carter, the executive director of the LSO. “It is all movie music and music that will be familiar to the crowd.”

The orchestra will play its first performance on Sept. 24 and Carter said people can come watch the music come to life.

“People don’t come to the symphony to just hear the music, but to see it as well,” Carter said. “There are a ton of great music you can download and listen to, but the symphony really brings to it to life.”

Originally, the LSO was a ‘community orchestra’ that consisted of an array of musicians. Overtime the orchestra evolved into a more professional layout that has managed to maintain and flourish in Troup County’s population.

“It is really remarkable that a town this size even has an orchestra,” said Raylene Carter, the Executive Director of the LSO.

“It is amazing that it has not only survived the last 30 years, but is also thriving, and growing in this day and age where classical musicians are struggling.”

Carter said that there are larger orchestras that go out of business all the time, so it means a great deal that LSO is still growing.

“We are extremely appreciative of all the support of individuals, businesses, the city and the Callaway Foundation have given us,” Carter said.

“Without all of them, we would not exist.”

Shows for this season are Sounds of Drama on Sept. 24h, Sounds of Dance on Oct. 29, Sounds of Peace Dec. 10, Sounds of Storytelling March 29 and Sounds of Home on April 28.

“We are true, professional symphony,” Carter said. “We just really wanted to start off the season with music that would appeal to people.”

Currently, only season tickets, or tickets that are comprised of all five of the above concerts, are on sale.

The season ticket includes 25 percent off regular ticket prices for all five shows and will be available for purchase until Sept. 24.

Tickets for the individual concerts will go on sale Sept. 5.

Additional ticket information and background on the concerts can be found on lagrangesympothy.org, or by calling the LaGrange Symphony office at (706) 882-0662.