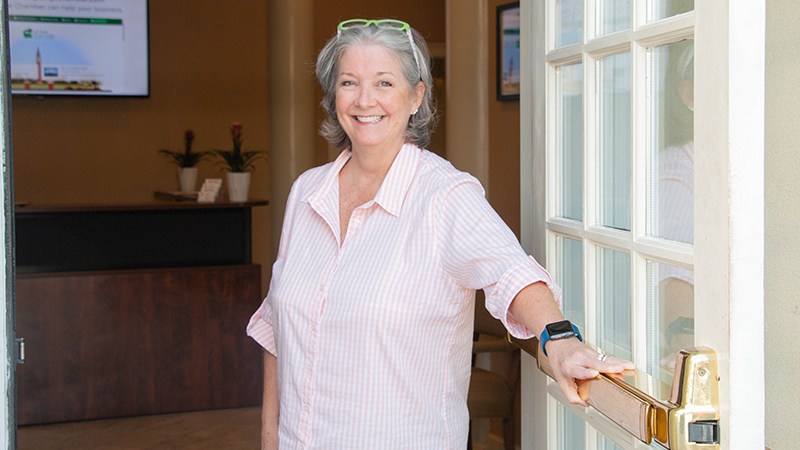 Kathy Tilley holds the door open to the LaGrange-Troup Chamber of Commerce where she took over as interim president and CEO on July 24. (Jenna Oden | Daily News)

Saturday marks the end of Kathy Tilley’s first full month as the interim president and CEO of the LaGrange-Troup Chamber of Commerce.

Tilley said the first 30 days have been busy, but the chamber hasn’t skipped a beat.

“[The transition] has been like drinking from a fire hydrant. Very busy,” Tilley said. “It has been actually very fun.”

In the span of her one month at the chamber, Tilley said they have put out the quarterly magazine “Troup Trends,” hosted a sold-out State of the County luncheon, organized the Early Bird Breakfast, hosted several groups at the chamber, finished the financial budget and dealt with the tourism split.

“It has just been a lot of things that the chamber typically would be in the process of doing but nothing has stopped,” Tilley said. “The hardest part is having limited staff here right now with the phone always ringing and someone always coming in the front door, which I love.”

Tilley said during the transition that the community and chamber members have stepped up consistently to help out at the chamber office.

“They have come by to say, ‘what can I do to help, how can I help you?’” Tilley said. “We have had volunteers man the desk, have had people offer to stay late if we are both out of the office, and Speer Burdette has stepped in as director of finance.”

Tilley said the community outreach and outpouring support has been a humbling experience.

“We could not have gotten through the past month without it,” Tilley said.

The chamber currently only has one full-time employee, Director of Member Engagement Leslie Traylor, who Tilley said has been a tremendous help.

“The chamber has a great membership, and I think it shows that people like the chamber, people appreciate the chamber,” Tilley said. “Chris Clark spoke at the Early Bird Breakfast and said that the chamber is about the community and bigger than anyone that works there. I think that has been very evident in the past month.”

During the span of the next few months while the transition committee looks for a president, Tilley said she will be there to make sure the chamber doesn’t miss a beat.

“My first goal is to keep the chamber running … with all the great initiatives that they have going on, and number two is to get out and meet as many businesses as I can to hear what they think,” Tilley said. “Another goal is to help the chamber take the first steps in this new chapter.”

Going further, Tilley said that the chamber will be different since it will no longer oversee the city’s tourism funding.

“I think it is very exciting that the chamber will be able to focus completely on chamber-related initiatives,” Tilley said.

According to Tilley, the transition committee will possibly have someone filling the role as president within the next six months.

“This is a wonderful job for somebody,” Tilley said. “If you want to meet people, be involved, support large and small businesses in our community, work on workforce development, work on legislative affairs, this is a great job for somebody.”