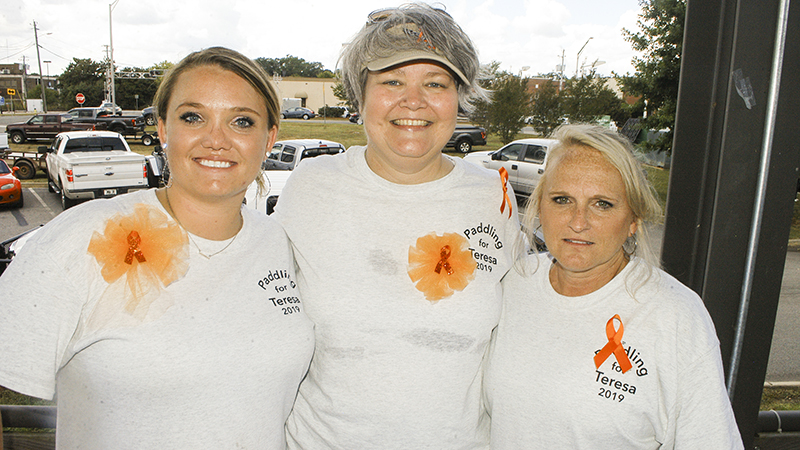 WEST POINT — Approximately 300 people took part in a Paddling for a Purpose fundraiser on Saturday. Approximately 40 people kayaked the Chattahoochee River from Hardley Creek Park to downtown West Point to join a big crowd gathered at the West Point River Park pavilion. The day was called Treasure the Chest in honor of women battling cancer, and money was raised for Teresa Knott, who has stage four renal carcinoma.

“Everyone here is helping out in some way,” said organizer Brandi Whited. “Some of us had a great time kayaking down the river. Others participated in a raffle or ate some of the really good food we prepared here.”

Many women in the crowd were wearing orange ribbons to show their support for Teresa.

“This is amazing,” Knott said. “I’m overwhelmed by it all. People I’ve never met before have been here today making donations. It’s so heartwarming.”

Knott’s treatment has been complicated by the fact she sustained a broken back during her third treatment. Some vertebrae had to be treated and to heal before the treatments could start all over again.

One of her kidneys was removed, but cancer will have to be removed from her spine.

“It’s all looking good,” she said. “All the doctors are positive about my recovery.”

The kayakers gathered at the pavilion at 9 a.m. and were taken by shuttle to Hardley Creek Park, which is just below West Point Dam. Most of them arrived around noon and joined the big crowd in enjoying a lunch of hot dogs and chicken salad sandwiches topped off by homemade ice cream.

Among those present was Kim Murphy, who survived breast cancer in 2016. She helped out by painting nails.

“Kim’s doing great now,” Whited said. “We so much appreciate her joining us today. People have been very responsive. We have had donations coming from LaGrange, the Valley and from Opelika-Auburn. There’s been such a good response to help women like Teresa who have cancer that we’d like to do this every year.”

Knott and her husband Ronny are raising four children. They are Olivia, Hunter and Breanna Mitchell and Allie Knott.

“We have been doing these events for four years and have raised over $14,000,” Whited said. “All of this goes to help people with cancer. We help them with medical costs, travel costs and family needs. We are applying for a 501(c)(3) designation. People can keep up with us on our Treasure the Chest Faceb0ok page.”