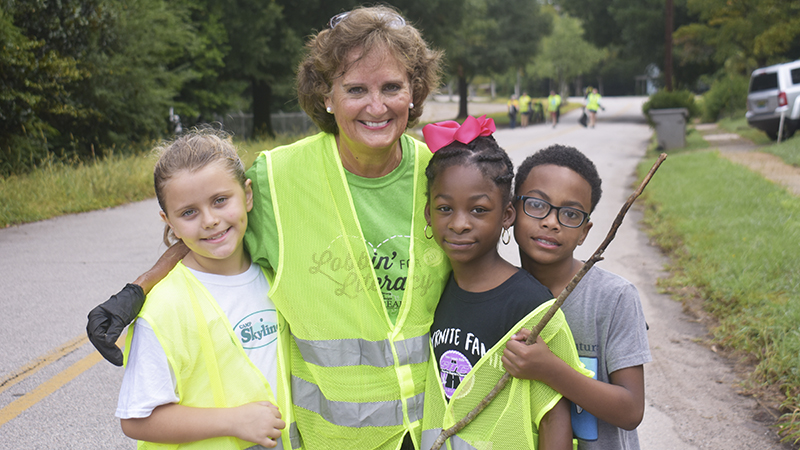 On Saturday, the Leaving LaGrange Better Than We Found It community litter cleanup saw a high turnout with roughly 60 community members, including city leaders and city employees participating in the event.

The August event began at Berta Weathersbee Elementary School, and city leaders said that the turnout at the event shows how much the community cares.

“I think it says a great deal about our community. It shows that our citizens care and that they want the community to look good,” LaGrange Mayor Jim Thornton said. “They want to do their part.”

Groups from First Presbyterian Church, Smyrna Baptist Church and Heart to Heart participated in the cleanup. Thornton said that he was excited to see the groups there and hoped to see more groups, especially church groups, at future cleanups.

“They both had large groups come out with church members,” Thornton said. “I hope that other churches in Troup County will take an interest in these cleanups.”

Thornton said that he feels that the regular cleanups and the continuing conversations surrounding those clean-ups have had an impact on the community.

“I think the city is a little bit cleaner now than it was when we started this project because I remember doing cleanups last year, and I felt like we collected a lot more litter than we did this past Saturday,” Thornton said. “There is still plenty to pick up, but I think it is a good sign that people are getting the message. I personally enjoy it. It is a lot of fun.”

He said that the clean-ups have also impacted the way he interacts with litter in the community.

“You get to see a lot of people on a Saturday morning and hang out together, and it becomes part of your DNA,” Thornton said. “When my wife and I go out walking our dogs, we pick up litter as we go — bottles and cans — because you start seeing it, and you just don’t want to pass it by.”

The September cleanup will be hosted in partnership with the U.S. Army Corps of Engineers. The event will be part of National Public Lands Day and will take place on Saturday, Sept. 28 from 8:30 a.m. until 1 p.m. at Holiday Campground in West Point.

According to the U.S. Army Corps of Engineers, National Public Lands Day is the largest single-day volunteer effort for America’s public lands, and this year’s event will focus on projects such as a shoreline cleanup, construction of blue bird nesting boxes and fish habitat structures.

“We invite the public to celebrate this special day by volunteering for a number of projects to benefit West Point Lake,” said Danielle Clark, natural resource specialist at West Point Project, in a press release.

While the majority of the lake is outside LaGrange city limits, the city has made a point of recognizing its economic impact on the city.

“I would like to see all the fishermen and recreational boaters join in on this,” Council Member Mark Mitchell said. “Hopefully we can get the word out to invite them.”

Volunteers who preregister are eligible for two nights of free camping on campsites at the Holiday Camp, and they can also receive a free boat ride on the lake and lunch at the campground. Lunch and boat rides will begin at 11 a.m.

“We encourage everyone, including families and large groups, who are volunteering for National Public Lands Day to relax and enjoy our beautiful campsites,” Clark said.

City Manager Meg Kelsey said that in 2018, a group from the city cleaned up a piece of the West Point Lake coastline during the National Public Lands Day event.

Those interested in volunteering for National Public Lands Day can contact the West Point Project Office at (706) 645-2937 or e-mail Danielle.E.Clark@usace.army.mil.