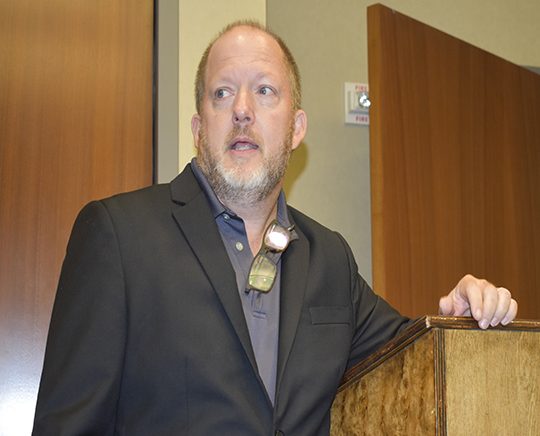 On Thursday, LaGrange Economic Development Executive Director Scott Malone shared an update with the Troup County Board of Commissioners on what the community can expect to see coming out of the ground in the near future.

Malone said projects already in the works are expected to account for hundreds of additional jobs in the community, primarily in manufacturing.

“A lot of communities are sitting back waiting for things to happen, and we continue to go out there and drive relationships both throughout Europe and Asia by going there and spending time, then bringing projects back,” Malone said.

“It is not an accident that a lot of them end up here. Only about 20 percent of our projects come through the state, so the rest of them, we are creating our own pipeline.”

Malone said that a Chinese company called Winhere Brake Parts has plans to locate in Troup County near the site that was previously considered for Sentury Tire.

“They are a Chinese company that makes brakes for Advanced Auto Parts and O’Reillys,” Malone said.

“It is a $100 million investment, 250 jobs, fantastic company. They’ve been distributing out of Chicago since the 90s.”

Malone said that the company is coming because of the national tariffs, and it would be a major utility user for the area. If utilities are purchased from the city, that would be significant for LaGrange since the city funds the bulk of its government services — from roads to police — through utilities. Kelley Bush, who is also on LaGrange’s economic development team, also attended the meeting, and Malone said that she has been working hard to make LaGrange and Troup County a more attractive place to do business.

“It is a very positive project for the community that we are very excited about,” Malone said. “A lot of people continue to be concerned about China. We are not in the long term. We are positioned better than anybody else really in the southeast. Georgia, as you all know, is the number one state for business in the country and has been for seven years in a row. When it comes to the Chinese commitment, we’ve made an enormous commitment including Kelley spending the last two years learning Mandarin and the process associated with that.”

According to Malone, there are 41 international companies from 18 countries in Troup County.

Wellmade Performance Flooring, a Chinese flooring company who makes flooring for Costco, is also considering locating in the area, according to Malone. The manufacture would mean about 50 additional jobs.

“It is very, very positive for us as a community as we continue to lay the framework,” Malone said. “At the end of the day, China has all the money, and they are the ones who are going to continue to invest.”

Malone said that LaGrange’s economic development team is optimistic about the trade issues being settled with an election year on the horizon, but current freezes on work visas could slow down the process of companies relocating to Troup County.

Malone also discussed the purchase of Caterpillar’s purpose-built forestry business by Iowa based Weiler, which plans to work to expand the Troup County location and possibly bring an additional 70 to 80 jobs to the community within the next five years and spend roughly $20 million on the project.

Additionally, Malone said he was also excited about company’s expanding and committing to growth in Troup County, including Interface and Milliken.

However, he emphasized the importance of making bonds available to ensure jobs remain in the community, even as major technology upgrades make major renovations necessary.

“Understanding that with technology and a lot of the things that are happening, a lot of times it is about protecting jobs,” Malone said. “Interface is one of those, and it has paid off in a big way because they are making an enormous investment in the community, and we are very excited about that.”

Malone also highlighted some the areas that will require attention from both the city and the county, including continued improvements to local infrastructure and the need for a better housing selection.

“Let’s maintain where that growth is. I think we all would rather it be high density growth than spread out all over the community. That is predicated by sewer.”

Malone also reminded the board of commissioners that more homes are needed in order to secure the retail options that many residents regularly request and to ensure that the area will still have a solid workforce outside of commuters.

“We finally have gotten some multifamily projects underway, which is a big positive,” Malone said.

“We need as a community to work with a lot of these folks coming in from the outside. We’ve got a great reputation. We just don’t need the reputation that we don’t want any growth because we are not going to continue to have 20,000 people commuting into our jobs every day.”

Progress on the Selig property near Great Wolf Lodge, the role of The Thread in development, the branding of the Georgia International Business Park and progress on the major landscaping project at Interstate 85’s Whitesville Road exit were also shared during the meeting.

Cafe Detour to close its doors on Friday