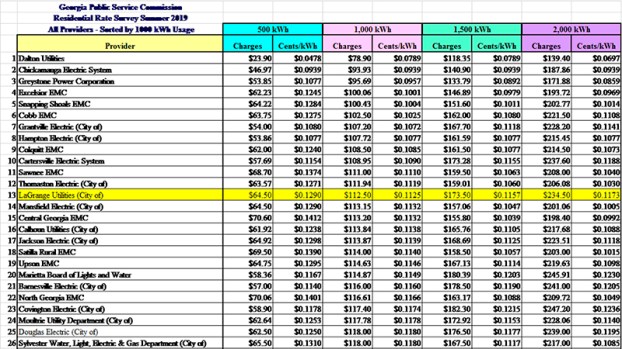 Utility prices have risen across the state in the last year, but according to information recently released by the Georgia Public Service Commission, LaGrange has retained summer electricity prices among the lowest in the state.

In the GPSC summer 2019 residential rate survey, the state average was $126.35 for 1,000 kWh, with LaGrange’s rate hitting at $112.50 for the same amount of power. LaGrange Utility Director Patrick Bowie said that being rated 13th lowest priced electricity provider in the state was not a surprise, since the city has consistently received good rankings for its rates.

“You can see if you look on the website that they’ve been doing this survey for many years, and we’ve been in the lower cost percentage for many years,” Bowie said. “So, I wasn’t really surprised. LaGrange has always had very competitive rates not just compared to other Georgia utilities but compared to all utilities in the country.”

In comparison, Diverse Power charges $142.42 for 1,000 kWh, while Georgia Power charges $131.08 for that amount of energy. Bowie said one of the reasons LaGrange is able to charge less for electricity is because of its service area.

“We are fortunate that we have a small service area, so we do have a little bit of an advantage there being a municipality,” Bowie said. “Our service area is fairly concentrated, and our electric crews are very productive. They get a lot done with few resources, and that goes a long way toward keeping our rates low as well.”

Troup County’s other cities are higher than the state average, but well below City of Washington Electric, which had the unfortunate distinction of the highest electricity rate listed in the survey at $181.18 for 1,000 kWh. City of West Point Utilities charges $138 for 1,000 kWh, and City of Hogansville Electric charges $136.22 for 1,000 kWh.

“We’ve always maintained enough generation to cover our load,” Bowie said. “Some utilities are buying more power out of the market, and then you are subject to market fluctuations, but we’ve always tried to maintain sufficient generation to meet the needs of our customers. Then we sell excess power into the market, and we’ve been able to make some extra money by doing that, which also tends to put downward pressure on rates.”

“It also helps the fact that we have multiple utilities, so our overhead is low because we get to share our overhead cost among electric, gas, water, sewer, sanitation,” Bowie said. “So, we are using the same billing system and the same customer service reps, the same meter readers.”

Bowie said the rates are only half of the equation when it comes to power bills.

“People do sometimes get high bills, but that is related to the amount of usage, the amount of kilowatt hours that they are using and not necessarily the price,” Bowie said.

“Our prices are very low, but that still doesn’t mean that your bill is going to be low. If you’ve got a poorly insulated home or if you are turning your thermostat down too low in the summer time, using a lot of power, you are still going to have a higher bill.”

The newest survey is expected to be posted on the PSC website in coming days, but past surveys can be viewed at Psc.ga.gov/utilities/electric/residential-rate-survey.

On Thursday, LaGrange Economic Development Executive Director Scott Malone shared an update with the Troup County Board of Commissioners on... read more