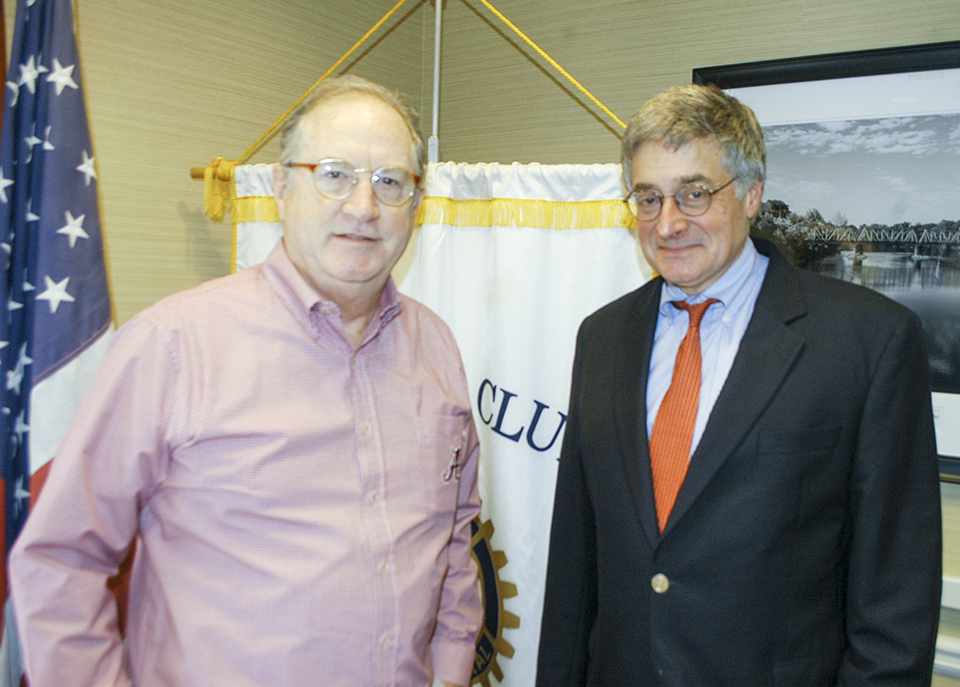 Atlanta History Center President and CEO Sheffield Hale (right) was the guest speaker at Thursday’s meeting of the West Point Rotary Club. He talked about the famed Atlanta Cyclorama, which reopened earlier this year in a new location. It’s now part of the 33-acre Atlanta History Center complex in the Buck-head section of the city. Rotary Program Chairman Rea Clark stands to the left. (Wayne Clark | Daily News)

LANETT — Sheffield Hale, president and CEO of the Atlanta History Center, was the guest speaker at Thursday’s meeting of the West Point Rotary Club and talked about the Cyclorama’s new home.

For years, the cylindrical panoramic painting of the 1864 Battle of Atlanta was on display at Grant Park on the city’s south side. In July 2014, city officials announced plans to relocate it to the Atlanta History Center in the Buckhead section on the city’s north side. The move was seen as a win-win for both the historic painting and the Grant Park Zoo, which needed the extra space for an expansion of its African elephant habitat. Without that expansion, it’s doubtful the zoo would continue to have elephants for an extended period.

In the fall of 2015, the History Center began construction on a 23,000-square-foot building to house the painting, its diorama and the famed Civil War era locomotive Texas, famed for its capture of The General in the Great Locomotive Chase of 1862.

The original painting dates to the post-Civil War era and the North’s celebration of victory.

“It was painted by Germans in Milwaukee who were trying to make money,” Hale said. “Two-thirds of the soldiers shown in the painting are Northern, and their generals are identifiable. No Southern officers are identifiable. It’s pro-Yankee.”

More than 40 copies were made and displayed in road shows all over the North. Eighteen of them wound up in Europe.

The Battle of Atlanta painting remained a Northern thing until a man named Paul Atkinson of Madison, Georgia purchased it in the early 20th century for the purpose of having it displayed in Atlanta. A German painter named Kurtz was put in charge of having it repainted to have a more pro-southern point of view.

“The prisoners of war in the painting were painted in blue uniforms,” Hale said. “It was the place in Atlanta to go. Even the cast of Gone With the Wind went there when the movie premiered in Atlanta in 1939.”

Then Atlanta Mayor Henry Hartsfield asked Gone With the Wind star Clark Gable about his thoughts of the painting.

The mayor was somewhat miffed by the self-absorbed comment and later added what’s still called Hartsfield’s Revenge to the painting. There’s a statue in the foreground diorama that strongly resembles the famed actor, mustache and all. He’s a dying man in a Yankee uniform.

Hale said the Cyclorama has had its ups and downs over the years. It had gotten in really bad shape by the late 1970s when then Atlanta Mayor Maynard Jackson backed a $10 million plan to have it restored. The mayor, who was pro tourism, thought that a whole new look would draw more people to something the City of Atlanta was famous for.

“They did some great things in that restoration,” Hale said. “They put fiberglass backing on it and circular seating for those who came to see it.”

By 2010, the painting had gotten in bad shape again. Up close, Hale said, it resembled a shower curtain with lots of wrinkles.

“It was a mess before we moved it,” he said. “We went to the Gettysburg Cyclorama, which had recently been restored, to ask advice.”

“We had three options,” Hale said. “We could keep it where it was, move it to downtown Atlanta or move it to the History Center in Buckhead, where it could be displayed alongside the largest known collection of Civil War artifacts under one roof.”

The Buckhead location won out.

“The Whitakers gave us $10 million,” Hale said. “We raised another $25 million, and 150 years and one day after the Battle of Atlanta we announced that we’d be doing this.”

Making that commitment was one thing; doing it the right way was something else.

“We sought lots of advice on this,” Hale said. “We wanted to know if we could roll it with the backing on it. We found out we could and did it without losing any paint.”

On a very windy day in January 2017, two rolled sections were lowered into the building by a giant crane.

Efforts were made to make the painting take on its original appearance. One section that had been cut out over the years was put back in, and more sky was put in at the top of the painting. The foreground figures including the dying Rhett Butler lookalike were put back in. Most of the original figures were made as part of a WPA project during the Depression.

The newly-restored Cyclorama is one of many interesting sites in the Atlanta History Center. Spread out over 33 acres, the History Center also includes the Swan House, the Wood Family Cabin, the Tullie Smith Farm, the Bobby Jones Museum in honor of the legendary golfer, a folk-art museum and a Centennial Olympic Games Museum.