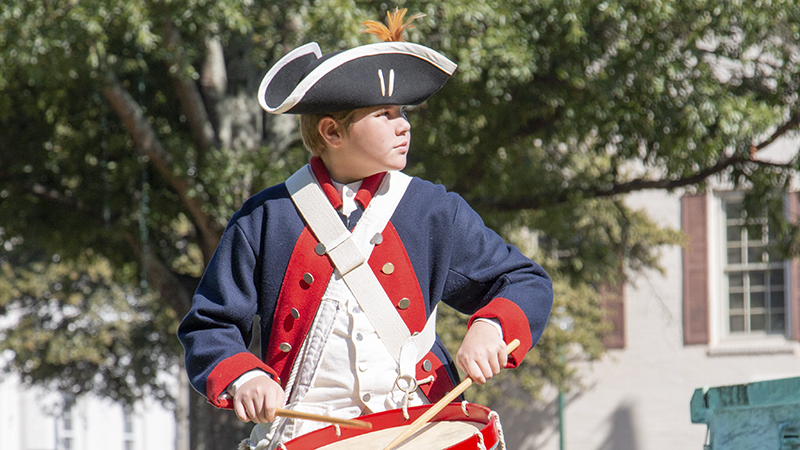 Above, a drummer boy from the Sons of American Revolution beats the drum as the Marquis De Lafayette program ends with retiring of the colors. (Jenna Oden | Daily News)

Friday marked the second year of Sept. 6 officially being Marquis de Lafayette Day in honor of the Revolutionary War hero.

The Lafayette Alliance, local officials, history enthusiasts and music, theatre and other students from schools in the community gathered at the square Friday morning to take part in the second annual wreath laying and commemoration ceremony.

“We are here today to celebrate the birthday of Marquis De Lafayette who today is 262-years-old,” said Lafayette Alliance President Dr. Richard Ingram. “We are here to celebrate a story that is universal, there is something in it for everybody. It touches hearts, minds and souls.”

Ingram began the program by telling the background of how Lafayette began his venture to become a war hero.

“He decided that he would go to America, that he would fight with Americans for their independence,” Dr. Ingram said. “It is a remarkable story. The presence always is in conversation with the past, and we have much to learn.”

The alliance made it a point to invite students and schools to focus on educating the youth on the history of LaGrange and Lafayette.

“I have had the privilege of educating the youth and their mentors about Marquis De Lafayette, known to them as the man in the square,” said alliance Vice President Kathryn Mathews. “We wanted to focus on the youth and the important role they play and how they have honored Lafayette in their schools.”

“There were books written and projects developed, both from every aspect of his [Marquis De Lafayette] life,” said Troup County School System employee Dr. Sue Forrest. “Last year Tasha Callaway wrote a children’s bi-lingual book about who is this man on the square … the most recent project was a YouTube video written and produced about Lafayette by four young men.”

Cards with two QR codes were placed through town for easy access to view the two projects.

“The project and book that these students have produced has touched the lives of many,” Forrest said.

Performances by students from Callaway Middle School, the official wreath laying ceremony by THINC students and the annual 21-gun musket, canon salute finished the program with a bang.