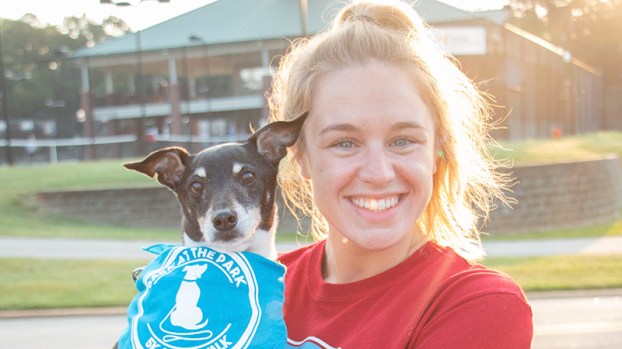 Pops poses for a photo with his owner Anabeth Ivey at the annual Bark at the Park 5k race and one mile dog walk event Saturday morning.

On Saturday Sept. 7, dogs and owners from LaGrange gathered at Bark in the Park — a HYPE-sponsored 5k and dog walk benefiting the LaGrange Humane Society.

The event kicked off around 7 a.m. with a 5k where owners and their pups participated in a run around the Granger Park area. The winner of the 5k was Alex Porraz, who ran with his dog Nala.

“I just came here to have a fun time with Nala. We weren’t expecting to come in first, but we did which was pretty cool,” said Porraz. “I thought I would have to carry Nala, but she ran the whole way. We had a great time.”

The HYPE board — consisting of Anabeth Ivy, Stephanie Thomas, Derek Thomas, Josh O’Neal, Jasmine Burton, Meghan Duke, and Trae Long — organized the event. HYPE reached out to cross country teams at the high schools, tennis teams and several LaGrange businesses to get people involved in the dog walk. Their goal is to grow the event each year and to raise more money for the Humane Society.

“We try to build the event every year. We want to raise awareness of HYPE and for the Troup-LaGrange Humane society,” said Trae Long, member of HYPE in LaGrange.

This is the fourth annual Bark in the Park event, started originally by HYPE because of the lack of events in LaGrange that were dog-friendly.

“We noticed that LaGrange didn’t really have that many dog-friendly events,” said Ivy, president of HYPE. “Everyone in HYPE came together to plan and execute Bark in the Park, and we’ve been doing it every year since.”

The humane society was also at the event with dogs who need homes. The goal of the day was to adopt out every dog that was at the event.

Last year, the humane society adopted out 104 dogs throughout the year. This year, the goal is to adopt out 125 dogs.

LaGrange’s international community shared food, culture and art over the weekend with a series of events through LaGrange International Friendship... read more