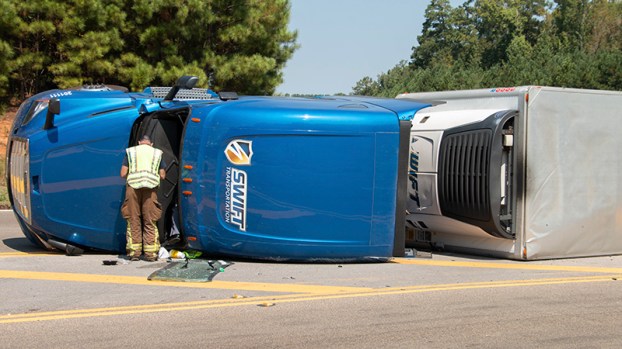 An 18-wheeler transporting more than 40,000 pounds of candy flipped over while trying to turn on the s-curve on Highway 27 Monday afternoon.

According to Sgt. Scott Jeter with Georgia State Patrol, the driver suffered minor injuries to his head and body and was transported to WellStar West Georgia Medical Center.

“It is obvious he was going a little too fast for the curve,” Jeter said. “This is a curve that we work a lot of overturned tractor trailers at. It is going to be a lengthy clean up that we will be out at for a while.”

A portion of the road was taken up by the SWIFT transportation truck. According to officers, the truck was headed south toward Alabama.

“The driver was not local. … He just came to the sharp curve and was traveling too fast,” Jeter said. “He had a head injury but nothing that seems to be life-threatening.”

No other vehicles were involved in the accident.

A crowd gathered at Del’avant on Friday night to enjoy culinary creations by local chefs and a wide variety of... read more