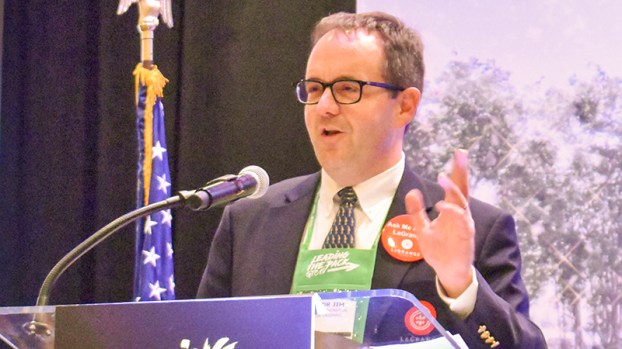 The 2019 Georgia Governor’s Tourism Conference officially began on Monday with a welcome and presentation of colors by representatives from LaGrange.

This is the first year that the conference has been hosted in what tourism partners refer to as the “Presidential Pathways” portion of the state, which includes Americus, Sharpsburg, Columbus, Pine Mountain, LaGrange and a portion of Lake Blackshear. The theme of this year’s conference is Leading the Pack, which was appropriate considering its location at one of Georgia’s newest tourist destinations, Great Wolf Lodge in LaGrange.

Following a presentation of colors by the LaGrange Police Department and the National Anthem by Kevin Dunn, LaGrange Mayor Jim Thornton shared the story of how Great Wolf Lodge came to locate in LaGrange and its impact on the community. His story began when Great Wolf Lodge had just hit a roadblock in Peachtree City and began looking at other locations for the resort.

“Tom Hall — who was our city manager at the time — he had this insight that I think set the tone for the rest of that year of negotiation with Great Wolf,” Thornton said. “He said, ‘Why don’t we just think of Great Wolf like we think of a manufacturing industry?’ Right? We always say tourism is economic development. … It is 700 jobs. It is a $170 million capital investment.”

Thornton said that LaGrange has plenty of experience recruiting industry, so thinking about Great Wolf Lodge in terms of economic impact made it easier to make decisions on what sort of incentives should be offered to make LaGrange stand out. Thornton highlighted the fact that Great Wolf Lodge significantly diversified LaGrange’s job market, while providing facilities unlike anything else in the community.

The conference center in itself was a sort of incentive, in that the City of LaGrange paid for its construction through a bond and holds the deed to the facility, while allowing Great Wolf Lodge to make use of the space.

“One of the final deal points that enabled us to make this facility happen is we were able to use a city bond — a $17 million municipal bond — to build the conference center component of the resort,” Thornton said. “Whereas Great Wolf was building the hotel and the resort and the water park and all of the amenities, the City of LaGrange actually built and holds title to this conference center facility. That is something that we had wanted in LaGrange for years.”

Thornton recalled serving on the LaGrange City Council and council members wanting a conference center for major events in LaGrange. However, until Great Wolf Lodge considered the city, it had no means to fund a large conference center.

“Great Wolf brought us a revenue source because like many of you [at the conference], we have an 8 percent hotel/motel tax, and of that 8 percent, as you know, 3 percent goes into the general fund of the city and 1.5 percent is eligible for designation by the city as a tourism product development project,” Thornton explained. “That gave us 4.5 percent of the hotel motel tax revenue, and we were able to dedicate that to repaying this bond so that it became revenue neutral to the city based on the hotel/motel tax receipts from Great Wolf.”

Thornton talked about the importance of a strong revenue stream for the city in order to address issues like poverty and housing. He also talked about partnerships at the local and state level that helped recruit the resort to LaGrange, and go on to benefit the city, county, region and state.

“This is something different. It is a destination resort,” Thornton said. “It is going to bring people from not just across Georgia, but from all over the southeast, and it has brought people from Alabama, South Carolina — the entire southeastern region is represented here.  They’ve exceeded 50 percent from out of state.”

The Georgia Governor’s Tourism Conference is the state’s largest tourism conference. The three-day conference provides educational sessions and keynote speakers relevant to the tourism industry. To learn more about the conference, visit Georgiagtc.com.

The Interstate 85 repaving project in Troup County is on schedule, but it will still be a while before drivers... read more