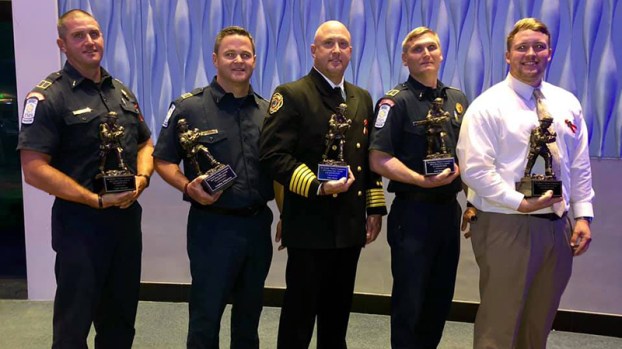 Members of the LaGrange Fire Department were awarded Saturday night at the Ronnie Thames Foundation Silent Hero Banquet in Atlanta.

Chief John Brant won the Leadership Award and the LFD’s 3rd Battalion and Troup County Rescue 1 received the Teamwork Award for their work during a Labor Day fire that left six firefighters with injuries.

“I knew I was nominated for the leadership award but did not know I would win,” Brant said. “It was a complete surprise to win it.”

The foundation was established in 2012 to help children and their families who have faced devastation and suffering as the result of a fire.

According to Ronnie Thames Foundation President Pam Bozek, Brant won the 2019 Silent Hero Award for his above and beyond leadership and dedication to the LPD.

“After reading a lot of the nominations, I thought that the competition was stiff and it had a lot of great leaders nominated,” Brant said. “I just very honored to win it.”

Not only did Brant win the leadership award, the members of the LFD 3rd Battalion won the Teamwork Award as well.

“I was proud of our department and just like I said in my speech, I accepted my award on behalf of every firefighter that serves at LaGrange Fire Department because they come in and do a great job each and every day,” Brant said.

“They make my job extremely easy as a fire chief because they come in and give it their all.”

“This award recognizes a group who works collaboratively in order to achieve a common goal,” Brant said. “I felt that they deserved it … it was just an honor for those guys to be recognized for the amazing job they did that night.”

The banquet gives out an award in four categories: heroism, leadership, teamwork and community.

“Chief Brant and his department is hands down well deserving of these awards. We know he is an awesome leader, and we are so proud of these guys.”

Those honored with an award, including Chief Brant and the 3rd battalion will also be taken on a trip to New York City in the spring to visit the New York City Fire Department and 9/11 World Trade Memorial Museum.

“Very rarely the firefighters get recognized for the job they do and it was nice to receive that recognition,” Brant said. “A special thanks to the Ronnie Thames Foundation for not only recognizing the LFD but all of the fire departments across the state of Georgia and the community outreach they do on a daily basis.”