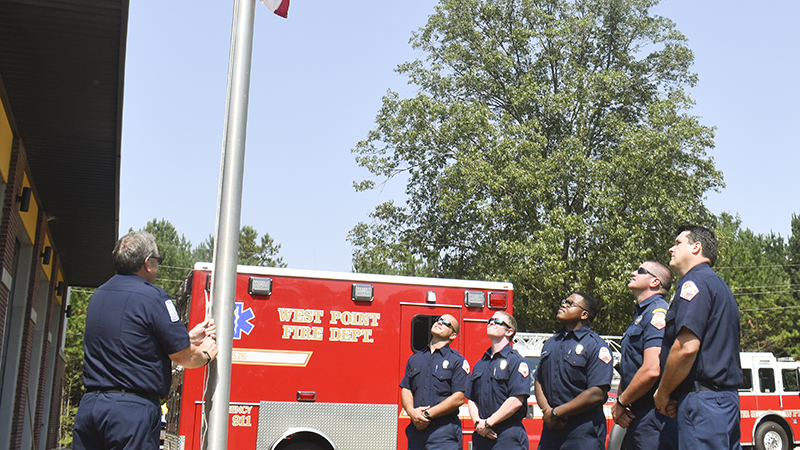 “The television was playing and nobody was paying attention, and then all of a sudden, it seemed to get much louder,” he said.

Smith, who was a lieutenant with 20 years experience at the time, along with fellow firefighters, were watching the live footage of the first plane hitting the Twin Towers in New York City, thinking it must have been an accident. But, then the second plane struck. That’s when he, and most likely most of America, knew it was a terrorist attack.

Smith said his next thought during that moment was what was going to be next?

However, Smith’s line of work causes him to never really know how each day is going to turn out. Some days, there may be a few minor medical calls and others may involve fighting fires on fully-involved structures.

Many days, he has left his home wondering how he will return.

“Will I go home at the end of my shift?” he said. “And will I go home in the same shape, form, fashion, including mental capacities, that my family sent me off in.”

Smith said that question doesn’t just ring true for firefighters but for law enforcement and other public safety providers.

However, 9/11 did change the perception of first responders.

Smith said on the local level and the larger cities that were directly affected, for about three to five days after 9/11, first responders were viewed differently.

After 9/11, Smith said it gave him a renewed passion for his job, even after 20 years.

“For so many it did,” he said. “All of a sudden, I knew I had to be prepared for anything. Not only did I have to be prepared, but I had to have my shift prepared.”

He said it takes a person who wants to make a difference to want to run into a burning building to save people.

“It is that true passion to make a difference for somebody else,” Smith said. “I have the training and have the equipment to make that difference.”

Current West Point Firefighter Seth Higgins was in high school when the planes hit the towers. He said he wanted to be a firefighter to be part of something bigger than just himself.

Brandon Ashford is even younger, saying he was in elementary school, but he knows that the attacks on New York City will always be linked to the fire service.

“It gives you a sense of pride knowing that people have laid their lives on the line before you,” Ashford said.

He said being part of the firefighting team or any public safety servants in West Point, meaning, police officers, telecommunicators or utility workers, it takes everybody to save lives.

“Everybody has their role in this thing,” he said when an incident happens. “Without all the different agencies working together, it couldn’t happen.”

Higgins said once first responders get to a scene, it doesn’t matter what little squabbles may be happening between people, it’s about saving lives.

“None of that stuff matters. It is about the person next to you,” he said.

Georgia Governor’s Tourism Conference closes out with discussion of…