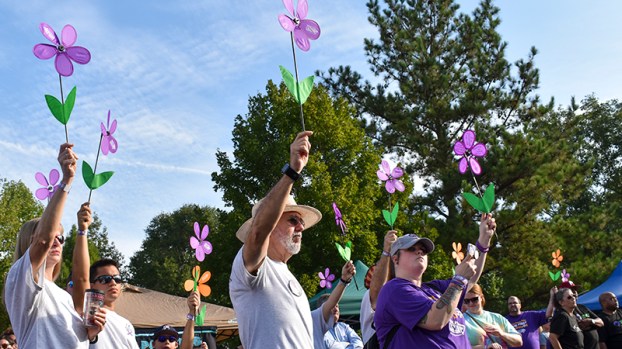 A lot of passion was shown in LaGrange on Saturday at the Walk to End Alzheimer’s event, where many businesses and community members gathered to show support for Alzheimer’s awareness.

Community members of all ages and abilities showed support at the event. Some were there to support a loved one, while others were there to raise awareness to the cause. Many walkers were decked out in t-shirts representing a family member lost to or battling Alzheimer’s disease.

Susan Burdick, executive director of Vernon Woods Retirement Community, explained the heartache and devastation that comes with this disease. Burdick said the purpose of holding the Walk to End Alzheimer’s in LaGrange is to terminate the disease completely, as well as the grief that Alzheimer’s carries.

“We hold this event because of the cruelty that comes with Alzheimer’s,” Burdick explained. “The disease doesn’t only affect the victim, but also the caregivers and family members. The reason we walk is to raise awareness and funds for this terrible disease to eradicate it completely.”

Cloey Norris, a walker at the event, is an annual participant in the event. Norris walks with her family, who takes part in the event for their 94 year old grandmother Ada Mae Lynch, who has been diagnosed with Alzheimer’s.

“This is our eighth year walking,” Norris said. “Our family knows how Alzheimer’s can affect people, and we want to do everything we can to raise awareness.”

Several members of the community volunteered for the event, including students from LaGrange High School, Troup High School, Callaway High School, Lafayette Christian School and LaGrange College. Several businesses were at the event as well showing sponsorship and support for the Walk to End Alzheimer’s.

“This group of dedicated, passionate volunteers are from our community and work closely together to inspire others,” said Burdick at the opening ceremony speech.