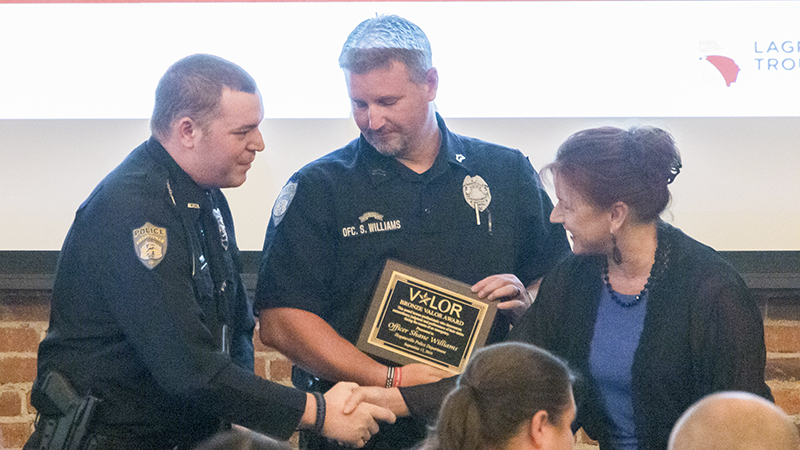 “Public safety officers are routinely called upon to perform miracles and to do the impossible,” said Marlene Rhodes, chair of the Chamber Board of Directors. “They are hard-working, dedicated professionals who are committed to making a difference. Today is our opportunity to say thank you for your service and to let each of you know that you have our respect and our support.”

The seventh Annual Valor Awards were given to officers and units who have performed their jobs with exceptional skill, expertise, innovation and results.

Dale Jackson, of Jackson Services, presented the awards with the first category being the Public Safety awards.

“On Jan.1, 2019, Troup County 911 received a frantic call from a male in Alabama stating he heard a gunshot, then saw a car go in front of his house and it appeared the neighbor was laying on the ground bleeding,” Jackson said. “This officer was also able to get a vehicle description, which led to the swift arrest of the home invasion and vehicle theft suspects. For her actions, our Valor Award for Communications Person of the Year goes to Officer Amy Mains of Troup County 911.”

The second award was presented to the murder investigation unit of the LaGrange Police Department – consisting of Detective John Slonaker, Sgt William Nelson, Lt. Dale Strickland, Detective Jeremy Jones, Detective Jason Duncan and investigator Andrew Foy – for their dedication and perseverance on a murder case in the summer of 2018.

The Public Safety Person of the Year award was presented to LPD officer Stephen Spivey for performing his job with skill and expertise.

“In December of 2017, the LaGrange Police Department began installing multiple License Plate Recognition (LPR) cameras strategically throughout the city,” Jackson said. “One LPD officer has utilized this technology on many occasions including identifying a vehicle used in a botched robbery attempt which included loss of life, identifying an out-of-state vehicle used in a series of local vehicle-break-ins and to help a mother who had received a random text message that her adult son was deceased. His arrest numbers are 25 percent higher than the patrol division’s average for the year.”

Two recipients received recognition in the next category of the Life Saving Award, in recognition of acts taken in a life-threatening situation where an individual’s life is in jeopardy, either medically or physically.

During the spring, the two Troup County deputies responded to a driver who had left the road in their vehicle and struck a tree during a massive seizure.

“For their response in saving the life of this victim, the Valor Award for Lifesaving is presented to Deputy Kindre Scott and Deputy Kyle Kirkland of the Troup County Sheriff’s Office,” Jackson said.

In the summer, Jackson said a male subject came to the LaGrange Fire Department and presented two fire personnel with a baby who was not breathing.

“Immediately, the crew began to assist with this medical emergency,” he said. “The child made a successful recovery. Due to their quick thinking in saving this infant’s life, the Valor Award for Lifesaving is presented to Lt. James Ormsby, Sgt. Paul Welsh and Firefighter Quinton Brown.”

The next award was the Bronze Medal of Valor, which is given in situations where a public safety official/unit demonstrates extraordinary judgment and performance of his/her duties.

“Finding an unresponsive person lying on a street was the emergency that two officers faced in May of 2019… Moving quickly with time of the essence, officers performed life-saving CPR and AED attachment and activation,” Jackson said. “Still no pulse and no breathing were detected. Not knowing the circumstances surrounding the man’s unresponsiveness, CPR was continued along with two additional AED deployments until the ambulance arrived 13 minutes later. The subject was transferred to the hospital with a pulse.”

The award was presented to officer Shane Williams and officer Nathan G. Smith of the Hogansville Police Department for their perseverance and judgment.

The next and highest award for bravery and heroism is awarded in cases where officers or units knowingly place themselves in harm’s way while saving or attempting to save the lives of others.

“On Labor Day of 2018, a structure fire was reported in a single-story residence,” Jackson said. “E-2 [LFD] officers were tasked with RIT (Rapid Intervention Team). E-1 crew advised that they had knockdown and needed hooks to pull down the ceiling. Command advised interior that the attic and two sides were still heavily involved in fire. Interior units were given 30 seconds to extinguish the flame or exit the structure. Conditions deteriorated rapidly and a smoke explosion occurred, followed by a flash-over of two rooms simultaneously causing the attack line to burn through and cutting off egress for the interior crews. E-1 crew called a Mayday.”

This was the first Mayday called in the history of the LFD, Jackson said.

“Two personnel had to fight back fire as they entered the residence to rescue those trapped inside…They successfully extinguished the blaze in less than a minute and began to search for the trapped firefighters,” Jackson said. “For willingly and knowingly acting in the face of immediate danger without hesitation and no concern for personal safety, the Gold Medal of Valor is presented to Sgt. Chris Greathouse and Firefighter Kevin Schmitz of the LaGrange Fire Department.”

The final valor award presented, the Purple Heart, which is awarded to a public safety professional who has been critically injured or killed in the line of duty at the scene of an emergency incident.

Four heroic firefighters from the Labor Day fire received this award after they received severe burns and spent weeks in the hospital returning to various levels of service t the past year as their injuries have healed.

“We are thankful for the service and sacrifice of all four firefighters and present the Purple Heart to Lt. Jonathan Williamson, Lt. Josh Williams, firefighter Jordan Avera and firefighter Pete Trujillo,” Jackson said.