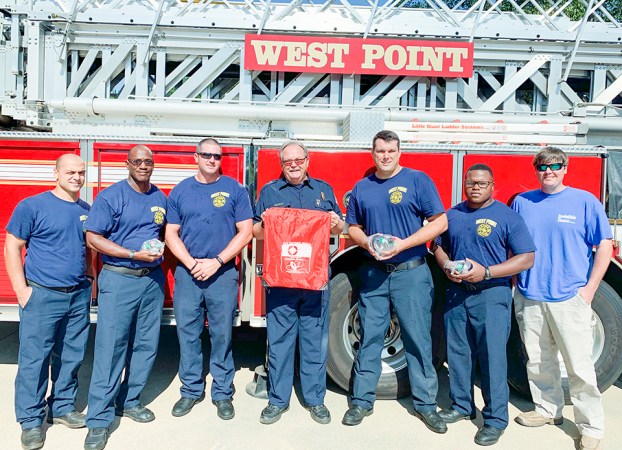 WEST POINT — Pets caught inside of a structure on fire in West Point can breathe a little easier now that the West Point Fire Department is the owner of three pet oxygen masks donated by Invisible Fence.

West Point Fire Chief Mitt Smith said when the fire department was made aware of the grant opportunity through Invisible Fence, he knew they needed to jump it.

“When we go out to these emergency calls where human have possibly suffered smoke inhalation, the animals can suffer from smoke inhalation as well,” he said. “We have oxygen masks we can give to a human, and now we have the tools so we can help with a pet as well.”

The masks are for dogs and cats, and separate masks are available for small, medium and large pets.

According to a news release from Invisible Fence, it is estimated that more than 40,000 pets die in fires each year, most succumbing to smoke inhalation. The news release says that in most cases, the first responders lack the equipment needed to resuscitate and save the animals.

“The Project Breathe Program is simple,” Ed Hoyt, director of Invisible Fence said in a news release. “We want to ensure that every fire department and rescue unit across the U.S. and Canada are equipped with life-saving pet oxygen masks.”

Since the Project Breathe program launched in 2006, more than 25,000 masks have been donated to first responders, according to the company’s news release. Smith said he doesn’t recall an opportunity in the recent past where the fire department would have needed the masks, but he said it’s better to be proactive than reactive.

“It is a resource that we need to prepare ourselves with the right equipment to do the right thing when called upon,” he said.

The masks are designed to cup specifically around the pet’s nose and mouth, ensuring that no oxygen is wasted. The human masks, which are intended to cover a human’s nose and mouth, would cause too much oxygen to escape if it was used on an animal.

Smith said having the masks on-hand will further the fire department’s mission of helping anybody touched by an incident.

“For a lot of people, their immediate family is their pets, and they love them just like their children or grandchild, so we are going to try to oblige them and help them as well,” he said.