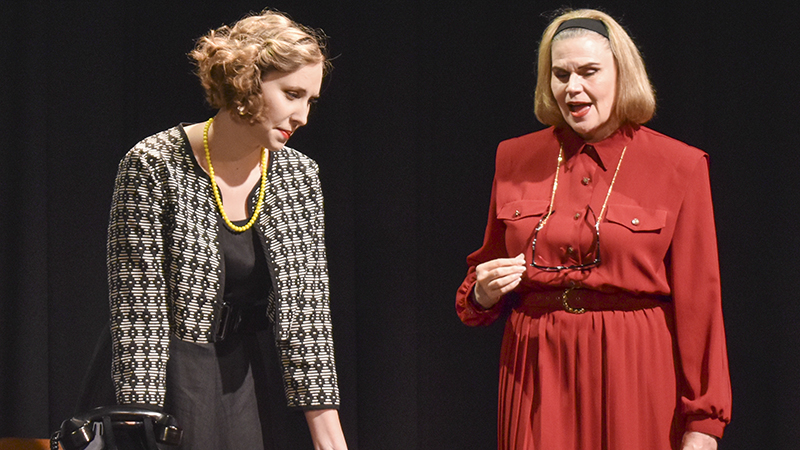 On Thursday night, the curtain once again opened for the King of Rock ‘n’ Roll — or at least his story.

The Lafayette Theatre Company performs Luigi Jannuzzi’s All the King’s Women this weekend and next week.

The fast-paced play follows the story of Presley as told by the women who he encountered along the way. The show features five one act stories and three monologues tied together with radio broadcasts providing historic context.

“Five of the scenes are based on actual events in the life of Elvis,” Director Carol Cain said. “Through these stories, we find out how Elvis got his first guitar, why he sang to a hound dog on The Steve Allen Show, and what happened the day Elvis showed up at the White House. We also uncover the aesthetic debate concerning Andy Warhol’s use of an Elvis image for one of his silkscreens, and we meet a loyal Graceland employee who traveled with The King.”

The play also includes scenes based on some of the best-known legends surrounding Elvis Presley.

“Two of these scenes reference Elvis favorites — peanut butter, bananas and Cadillacs,” Cain said. “The final scene features an Elvis impersonator and an employee at one of the Graceland gift shops.”

Those brief vignettes capture the spirit of the time periods when they were framed, along with the feelings that came with Elvis’ rise to fame — from the cautious sales clerk to the super fan.

“I think probably my favorite part of the entire show is just seeing all the different little scenes and how they all tie together,” said Bethany Miller-Urroz, who plays Andy Warhol’s assistant, Allie. “The way that we talk about all the different aspects of his life I think is pretty unique.”

Cain said that many of the cast members have attachments to Elvis, have seen him perform or have even tried out his style, which has given the 18-member cast a chance to bond while preparing for the play.

“We’ve had a lot of fun telling our Elvis stories and have included many of them in our cast bios,” Cain said. “Some of us have even eaten fried peanut butter and banana sandwiches as part of our preparation process.”

Even members of the cast who discovered Elvis’ music after his death said that the play was a great way to remember the music that they’ve come to love.

“I actually was a big fan of Elvis when I was in college,” said Leigh Webb, who plays Cindy, another one of Warhol’s assistants. “I still love Elvis. It has been fun to just kind of remember how much I really loved him and his music.”

However, Cain said that the performance reaches beyond Elvis himself.

“While this show pays homage to Elvis, it is also a wonderful time capsule,” Cain said. “Our scenes move from 1946 through the 50s, 60s, 70s, and then to modern time. The news blurbs and music that we use as transitions, the period photos we are projecting, and Janet Powell’s costumes beautifully capture the essence of the eras we are portraying.”

In order to accurately capture those time periods, the cast researched their roles and what it would have been like during the years they portrayed.

“We did research to figure out the time periods and that kind of thing to make sure that everything is as close as it can be to reality,” said Kim Dagenhart, who plays Lora, a Cadillac saleswoman.

Cain said that the cast also represent the decades in the play with performers ages 18 to in their 80s. The result is a show that quickly draws the audience in and keeps them watching.

“I think LSPA and Lafayette Theatre Company always put on great shows,” Miller-Urroz said. “Plays are sometimes a little scary. This is very fun. It is lots of short little bursts, so it’d be great for anyone to come and see if they maybe haven’t come to see a show here before.”

Miller-Urroz said that she has attended many LSPA performances, but Thursday night was her first time on stage since high school. Cain said that mix of new and veteran performers have made the performance a lot of fun.

LTC’s Black Box Picnic Theatre is located at 214 Bull Street in downtown LaGrange. The venue offers 112 seats divided among tables, allowing guests to provide their own food and drinks for a meal before and during the show.

The theater opens one hour before performances.  Concessions are available at each show, with a light bar added during mainstage/adult productions.

Individual tickets are $17 for adults and $12 for students, with season tickets also available. Tickets may be purchased online at LSPARTS.org or by calling (706) 882-9909.