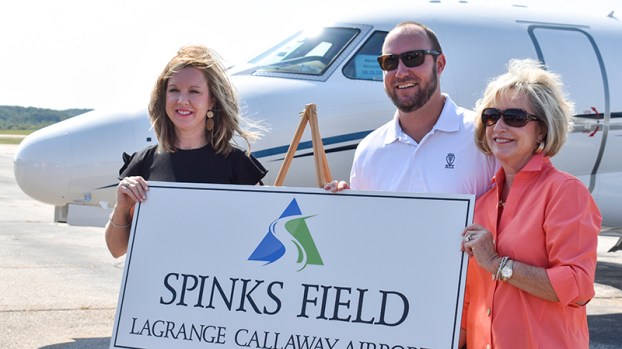 It was an event 20 plus years in the making.

“Almost everyone here knew Roy and knew of his passion for this airport and his love of flying,” said Tracy Spinks, Roy Spinks’ wife. “He would be so proud of the new runway extension, which was a longtime dream of his, and we are appreciative that after five years have passed, he will be remembered and honored in the naming of Spinks Field.”

The runway extension project began more than 20 years ago, and Tod Tentler, who was the county manager for the majority of the process, said that Spinks provided the encouragement needed to keep the project moving even after years of slow progress. When Spinks died prior to the extension’s completion, local officials began looking for a way to honor his contributions to the community.

“This has been a project that has been in the making for many years, and I’d like to just say that the idea of naming it Spinks Field came about three years ago,” Troup County Board of Commissioners Chairman Patrick Crews said. “Tod and I were in a conversation about what we could do honor Roy, and I have to give Tod credit for saying that it had to be something around the airport. So, we started talking about what we could do. As you know, this runway expansion has taken a long, long time, but we finally came up with the idea of naming it Spinks Field.”

Crews said that the naming of properties and buildings after people is relatively rare because the person has to be deemed worthy based on their character, contributions to the community and accomplishments, but he said Spinks met all those qualifications.

Tentler noted that Spinks had been heavily involved with the LaGrange-Callaway Airport practically since day one.

“In 1977, the airport authority was formed, and there was one person that was on that. It was Roy,” Tentler said. “He was on there until his unfortunate death. … He was a long-time member of this airport authority, and he had his hand in really everything that has ever happened here.”

The first terminal was built at the LaGrange Callaway Airport in 1987, and construction began on the hangers in the 80s and 90s. In 2009, the Callaway Foundation helped fund renovations to the airport.

“This project was on the books for over 20 years,” Tentler said. “The person who behind the scenes worked on it hard was Roy Spinks.”

According to Tentler, the airport now hosts 16,000 operations a year, resulting in a major economic impact on the county. That impact is in addition to the $10 million in investments at the airport, with 90 percent of that funding originating from the state and federal government, according to Tentler. Those investments are credited with having an estimated $8.7 million economic impact on the area, and the runway extension is expected to add to that.

“Mr. Spinks served the airport and the aviating community to benefit the economic growth of Troup County,” Steve Brian, GDOT aviation program manager. “Undoubtedly, you can see that [growth] in your community a great deal. I did not have a chance to meet Mr. Spinks, but my predecessors all said he was an example of leadership and passion for aviation in our state, and a lot of people remember that and know about that.”

The extension is expected to improve the safety for landings and departures, promote future growth of the airport and assist with the corporate needs of the counties and the cities. It will also allow aircraft to take off with more weight, allowing them to fly further non-stop, which is expected to result in higher fuel sales.

“In the end, it was a $6.2 million project that extended the runway by 900 feet, resurfaced the entire runway, put in a new, upgraded lighting system and extended the parallel taxing to the end of the new runway,” Brian said. “It was a great project, great for our state, great for the community.”

The LaGrange-Callaway Airport is located at 200 Airport Pkwy in LaGrange. For more information about the airport, visit Lagrangeairport.com.

On Thursday night, the curtain once again opened for the King of Rock ‘n’ Roll — or at least his... read more