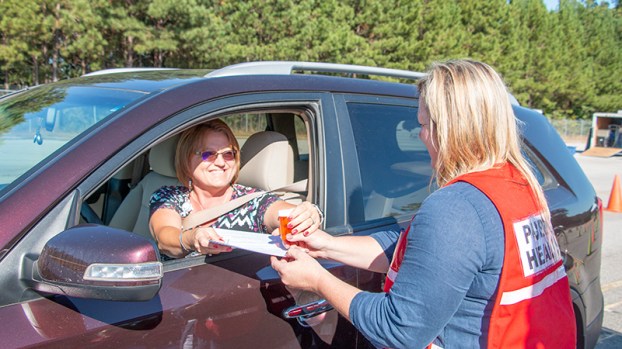 Above, a health department volunteer distributes a pill bottle that acted as a fake vaccine during the Troup County Health Department’s Point of Dispense practice on Wednesday. (JENNA ODEN | Daily News)

The Troup County Health Department prepared for the worst on Wednesday by running through a practice disaster scenario where an anthrax outbreak had infected Troup County.

Motorists passing closely by the Troup County School System’s central office might have heard a sound system testing an announcement about the fictional outbreak, but there was no need for concern. The announcement was part of the health department’s test of its Point of Dispensing plan.

“We have to practice having people come through here, signing paperwork and see how much time it takes for us to actually dispense the medicine,” said Tishari Hardnett, who was acting as the media relations person. “It shows where we are messing up and how to do better. Because if this was a real incident, we would have this set up and ready to go.”

Wednesday’s test run acted as if the community came in contact with the anthrax disease at Market on Main in Downtown LaGrange.

“We have set up a POD to distribute a vaccine for the anthrax disease,” said Benny Givens, who was also acting as a media relations person for the test. “If people are experiencing the symptoms, they need to come out here.”

According to Hayla Folden, Troup County Health Department District 4 Public Information Officer, in the act of an emergency like this the health department could potentially need to dispense a vaccine or medicine to every single person in Troup County within 48 hours. There are approximately 72,000 citizens in Troup County.

“So far, it is taking less than 10 minutes to get through paperwork and dispense the medications,” Hardnett said. “The longest process is filling out a form that includes all your information.”

On Wednesday, a condensed version of the scenario played out in Troup County.

“If this was a full-blown situation, we would most likely call on medical reserve volunteers and have more law enforcement for crowd control,” Folden said. “Also, the location of the central office for dispensaries was chosen because it has a full perimeter fence.”

As the health department ran through the drill, there were a few things that had to be fixed along the way.

“We realized some of the lanes weren’t going to work, so they adjusted and the set-up is now different,” Folden said.

“We are asking people about the message they hear from the radio station as they come through and if there is anything about that that needs to be changed or tweaked.”

In this practice run, the health department expected to see more than 100 cars come through.