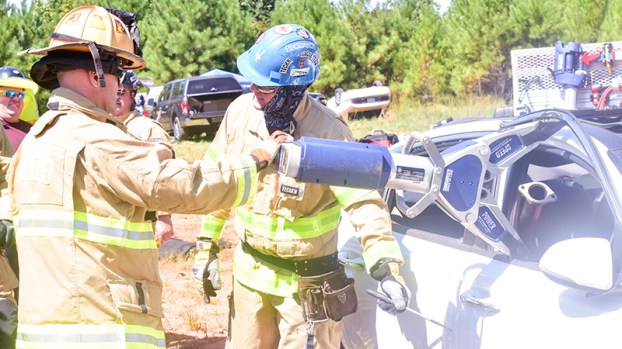 Firefighters from the West Point, Troup County and Meriwether County Fire Departments teamed up with Municipal Emergency Services to learn how to extricate passengers who were involved in a car accident and trapped inside.

Carl Raymond, rescue tool specialist with MES, said there have been significant safety improvements to vehicles since 2007. He said the metal in the cars has gotten thinner but also much harder.

“We have to learn how to defeat those to get you out of the car in the event of an accident,” he said. “That is the goal today (Wednesday) to learn how to get around that so we can disentangle the car from around the patient.”

Each manufacturer designs vehicles a bit different, but they all have to meet a minimum standard of safety.

On Wednesday, firefighters were able to practice on donated vehicles from Kia in West Point.

Raymond said he’s able to spend time with car manufacturers when designing and building the cars to learn how to dismantle them in an emergency safely. Then, he comes to back to places like the West Point Fire Department to train first responders about what’s new.

West Point Fire Chief Mitt Smith said knowing to assemble and disassemble a vehicle is critical, especially in an emergency.

“There are usually people who are trapped and entangled in crushed and disfigured metal,” he said.

“You need to know the anatomy of the vehicle to know how to take it apart without upsetting or further injuring the patients.”

Wednesday’s training was about having the right technique during extraction and understanding of basic tool balance and geometry. The next step is to place a mannequin in the vehicle to simulate a live person. Raymond said another group of first responders from the area would be trained Thursday on the same techniques.

Raymond said one of the greatest advances in the tools is the fact they are battery-operated today.

The original tools were gasoline-powered with hoses connected to it, which limited mobility.

Now, the battery-operated tools allow the first responder to be flexible while trying to save a person’s life.

Not all accidents are the same, but Raymond said the first thing firefighters do when called to a scene for extraction is survey the damage. The process is the same regardless of the size.

“We understand the structure regardless of the size. We understand we can apply the process and typically the outcomes are the same,” Raymond said. “The difference is the number of patients and where they are located.”

One of the first things happening on the scene is checking to see how many patients are in the vehicle, and learning about the age and ability of each patient. If the patient can speak, first responders are asking about the pain and its severity.

“One of the things we do is we look around to see what hazards are there first,” Raymond said. “We have to mitigate those hazards before we even start working on the car.”

He said the next thing is trying to get an emergency management professional in the vehicle with the patients to keep contact throughout the extraction.

If that can’t happen, he said there is always somebody at the window to be a calming voice. Raymond said that’s important information to learn but also helps with the emotional trauma of a major car accident.

“When you start cutting and pushing on a car, it makes a lot of noise and it can be very scary,” Raymond said. “That’s why making that contact and being calm in your demeanor is critical.”

He said first responders put a cover over the patient to protect them once the cutting of the metal starts, and the responder is under the sheet with them to talk them through the situation.

West Point to hold National Night Out event on Tuesday

The West Point Police Department’s National Night Out on Tuesday is a chance for local citizens to meet with law... read more