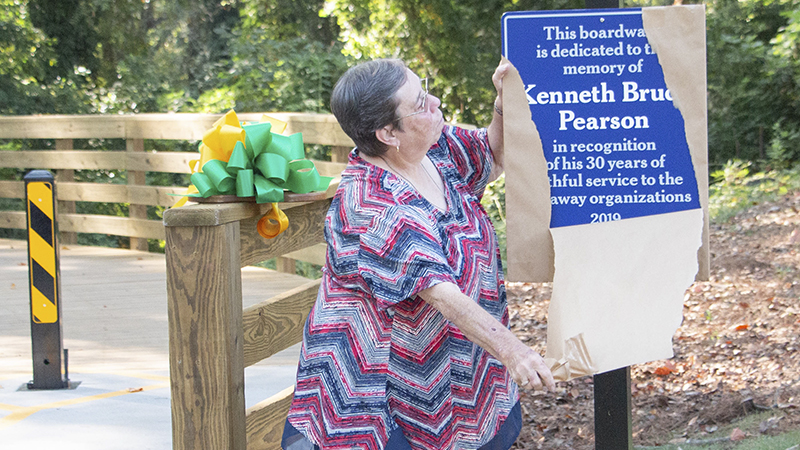 Catherine Pearson unveils a sign that was constructed on the newest phase of The Thread. The boardwalk on phase four of The Thread was named in honor of Catherine’s late husband, Kenneth Bruce Pearson. (Jenna Oden | Daily News)

Another phase of The Thread was finished and opened on Thursday morning on Country Club Road.

Originally, The Thread began as an idea that was presented to the city. Now more than 6 miles of the 29 miles planned have been completed.

The newest addition of The Thread on Country Club Road features a boardwalk that follows along a creek. Mayor Jim Thornton said the city wanted to make sure nature was not disrupted, but accentuated for this phase of The Thread.

“This was not originally planned to be phase number four, but the timing worked out because we were having to do some work on Country Club Road as a result of a sewer line issue,” Thornton said. “That was extremely disruptive for those residents who live out on this section of town, but I appreciate their patience. As we said at the beginning of this process, we know it is going to be disruptive, we know it is going to involve a lot of inconvenience for the residents.”

Thornton said that he promised residents that this portion of The Thread was going to look really nice.

“I said it was going to be very functional, very practical and they were going to like it,” Thornton said. “I think it has been a promised fulfilled.”

The boardwalk was dedicated to the memory of Kenneth Bruce Pearson for his 30 years of service to the Callaway organizations. Pearson died in 2014 at the age of 51.

“I am just feeling so proud, and Bruce would be so proud of this moment,” said Catherine Pearson, Bruce’s wife. “I am thankful they thought to do this in memory of him.”

Several members of Pearson’s family and even a few hunting buddies were in attendance at the ceremony to watch their late family member or friend be honored.

“He dedicated over half of his life in service for our mission,” said Callaway Foundation President Tripp Penn.

“The work he did was meaningful and he left an impact on all the people around him.”

Penn said The Thread is one reason LaGrange is unique to other cities.

“I think it has made us the envy of communities all across the southeast, all across the state,” Penn said. “What could be better for quality of life than to have a place for our citizens to gather and a place that helps us be healthier.”

“It’s tough to walk through this path, and these woods and across this boardwalk and not feel connected to the creator that made all these surroundings possible,” Penn said.

“One of the most important things about this Thread is that it brings people together.”

County looks at partnership for kayak ramp near West…