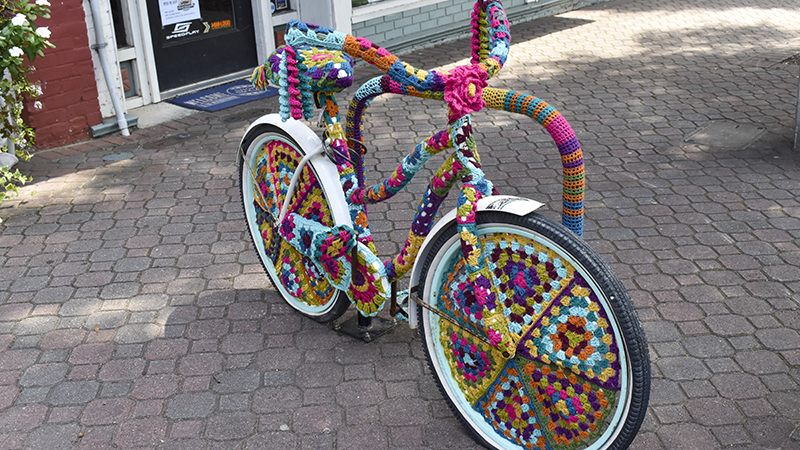 It’s beginning to look a lot like Rockweave. Downtown LaGrange is being yarn bombed in preparation for a music and arts Music and Arts Festival coming up Oct. 4 and 5 called Rockweave.

The festival grew out of Live at Wild Leap, a concert series collaboration between Sweetland Ampitheatre and Wild Leap Brew Co.

“The series was growing and going great,” said Wild Leap co-founder and Chief Marketing Officer Rob Goldstein. “So, we began talking about doing something bigger, something to bring more tourists to LaGrange. That’s how Rockweave was born.”

The name Rockweave comes from an old mill in LaGrange that made canvas bags and containers for the laundry industry back in the early 1900s.

Keyal Loveland, director of Sweetland Ampitheater, learned about the mill and thought it was a great name for a music festival. The yarn bombing is a tribute to the mill and to the town’s connection to the textile industry.

Bands will perform Friday night at Sweetland, then on three stages all day Saturday.

“Our goal was to create a lineup that was representative of our community, a diverse group of artists, to attract all age groups and backgrounds,” Goldstein said.

Besides music and yarn craft, the festival will feature art vendors, food trucks and a community row of nonprofits.

Wild Leap is the official craft beer and vodka sponsor of the festival, and the brewery created a limited-edition IPA to help get the word out.

Rockweave Double IPA was released statewide about a month ago. The 50,000-can release sold out quickly.

“It’s a double dry hop IPA with centennial hops. It has notes of grapefruit and pine, with low bitterness,” Goldstein said. “It’s a great beer.”

To get the town ready for Rockweave, more than 50 volunteer yarn bombers were enlisted by Sherri Brown and Holly Roberts of Circles Troup County. The group made creations like mandalas­ — those pops of color you now see in the trees.

“These were our biggest installation,” Brown said. “We have 140 of those.”

Brown said the team was standing in the aisle at Hobby Lobby and realized the yarn they liked didn’t quite match the palette already chosen for the festival’s marketing and signage.  So they bought the yarn and changed the graphics.

“Hobby Lobby gave us huge discounts on everything.  They were great,” Brown said. “We had hundreds of skeins of yarn to buy.”

The group has been working on Rockweave for awhile. Of her own creations Brown said, “I haven’t seen my dining table in 10 months.”

Freita Browning was one of the most prolific individual contributors. Along with other projects, she covered four bicycles in yarn. One sits in front of Golden’s Bikes. A group at the Active Life Senior Center was another large contributor, and there was a yarn group at LaGrange College.

“But it was mostly individuals,” said Brown, who adds that she has enjoyed meeting the creators. “Yarn people are just nice, generous, lovely people.”

Tickets for the festival and more information is available at Rockweave.com.