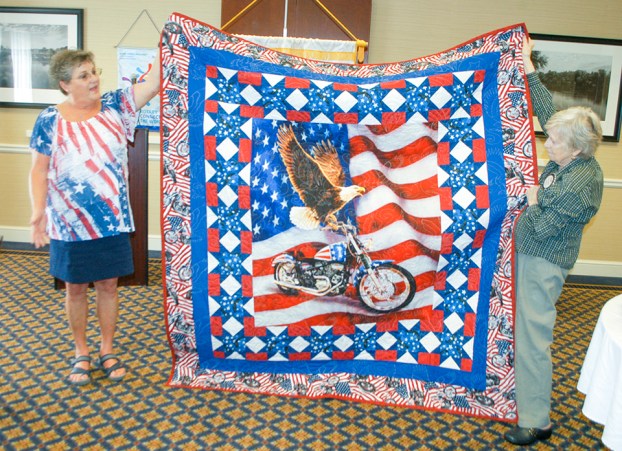 LANETT — Sheila Simpson talked about the Georgia-Alabama chapter of the Quilts of Valor and brought some examples of their impressive work to Thursday’s noon hour meeting of the West Point Rotary Club.

Simpson lives in Luthersville, Georgia and became acquainted with local quilters through her work at sewingmachine.com in downtown West Point. The local chapter started with two quilters and has grown to a group of 14 local women united in the cause of honoring U.S. veterans and active duty military personnel for the personal sacrifices they have made in defending our country.

“We’re now a certified quilting shop, and since there is no Quilts of Valor chapter in the east-central Alabama region, we’ve spread across the state line and represent both west Georgia and east Alabama,” Simpson said. “Our quilts aren’t for sale; they are earned through military service.”

Simpson became intrigued with quilt making by watching her grandmother when she was a little girl. She wasn’t much into doing it the old-fashioned way, an acquired skill that could take several weeks of hard work to complete. She’s what’s known as a long-arm quilter.

“It’s a sewing machine on steroids,” she said. “What might have taken your grandmother two or three weeks to complete, a long-arm machine can do in a few hours.”

Anyone who wants to see the quality of work being turned out at sewiwgmachine.com can walk past the former Kessler’s store in downtown West Point and see the quilts that are on display. It’s some truly exquisite work.

It takes some dedicated work on behalf of the quilting group to produce the Quilts of Valor they award to the local men and women who have served in the armed forces. It all pays off on the day they are presented. In most of these Saturday morning ceremonies at sewingmachine.com, the veteran being honored is visibly moved and expressed heartfelt thanks for what’s being done. In the most recent ceremony in early September, a Vietnam War veteran said that his only regret about the day was that his dad wasn’t there to witness it. His father had been a U.S. Army paratrooper and had died in the Normandy invasion 75 years ago.

Most of the quilts made by the quilting group are 55 inches by 60 inches and some go to 90 by 60. Panels and borders are sewn in. The quilting machines can put any design on a quilt, and the end result is something striking in appearance and much appreciated by the recipient.

Quilts of Valor is a national organization founded by Catherine Roberts in 2003. Her son was serving in the military at the time and was deployed to combat duty in the Iraq War. While having a sleepless night worrying about his safety she lapsed into a dream about him sitting on his bedside and longing for the comfort of a quilt. The next day she started making him one. She got other quilters involved in making quilts for others who were serving or who had served. The movement rapidly spread. Today there are hundreds of Quilts of Valor chapters across the U.S. and close to 230,000 quilts have been awarded to veterans and active duty personnel.

“That’s a lot but only a fraction when you consider the many men and women who deserve a Quilt of Valor,” Simpson said. “We will continue to do our part and hope that others will join us.”

On Tuesday, the Troup County Board of Commissioners considered a request to open 10 new part-time firefighter positions. According to... read more