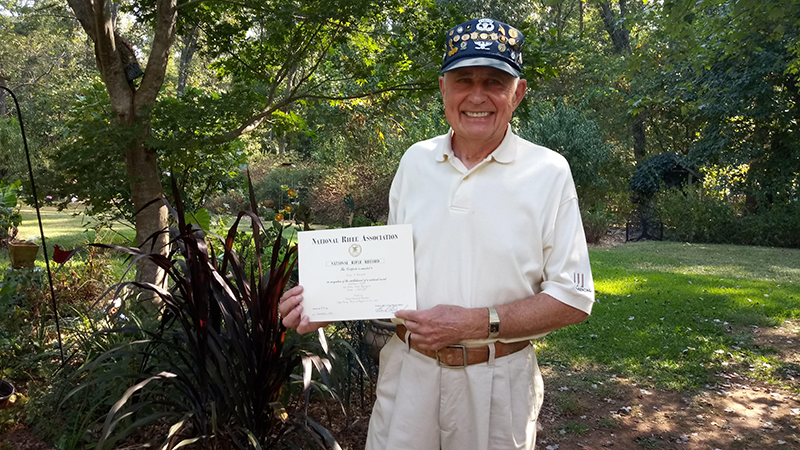 Bruce Meredith of LaGrange is an award-winning marksman who is still competing at the age of 82. He’s earned a remarkable 216 national records, as an individual and as part of teams; as well as an unheard of eight Gold Distinguished Shooting Badges.

“Shooting is a physical game, of course, but it’s also a big mental game,” Meredith said. “You have to make adjustments. On a good day, you think what did I do right? And on a bad day, what did I do wrong?”

Meredith has had a lot of good days and has lived in LaGrange for 45 years. He began his competitive shooting legacy at a military high school in West Virginia. It’s where he earned his first distinguished badge, a junior distinguished, from the National Rifle Association.

Meredith is a member of the Troup County Sportsman Club, and sometimes takes part in North Georgia Championships. He has plans to compete in Talladega and South Carolina before the end of the year.

He enjoys competition but said, “I’ve never been a hunter.” He also stays away from the politics of guns. He has enjoyed being part of the shooter community worldwide.

He was also been part of 18 World Championships of Rifle and Crossbow, and 7 Pan American Games. Meredith has competed in 40 nations and traveled to 102.

“I’ve been all over,” Meredith said. “Been to every state.”

Of all his travels, Meredith said “Switzerland is tops for shooting.” He also enjoyed traveling Northern Europe and the food of the Mediterranean.

One local highlight was meeting former NRA president and actor Charleston Heston at Callaway Gardens. As part of Super Bowl festivities, shooters, coaches and fans were gathered at the park and Meredith was helping there. Heston came in from the cold, and Meredith offered him a Callaway Gardens parka, then got a picture with him. It is part of what he enjoys about the shooting community. Though competitive, Meredith said “everyone is helpful and friendly.”

A retired army colonel, Meredith was active 30 years as both active and reserve. He served during the Cuban Missile Crisis, working with nuclear capable missiles, and he was also stationed in Korea.

Meredith is a member of the Sports Hall of Fame at West Virginia University, where he was honored with Sports Legend status in 2018. This fall, Meredith’s accomplishments were highlighted in Shooting Sports USA, the National Rifle Association’s National Magazine.

At home, Meredith is not the only award winner. His wife Marcia is a retired teacher from Callaway High School and was once honored as High School Teacher of the Year. They both enjoy working in the yard, though Meredith gives the credit for its beauty to his wife.

Shooting season ends in October, and Meredith is getting ready for his next competition.

TCSO, LPD take part in National Coffee with a…