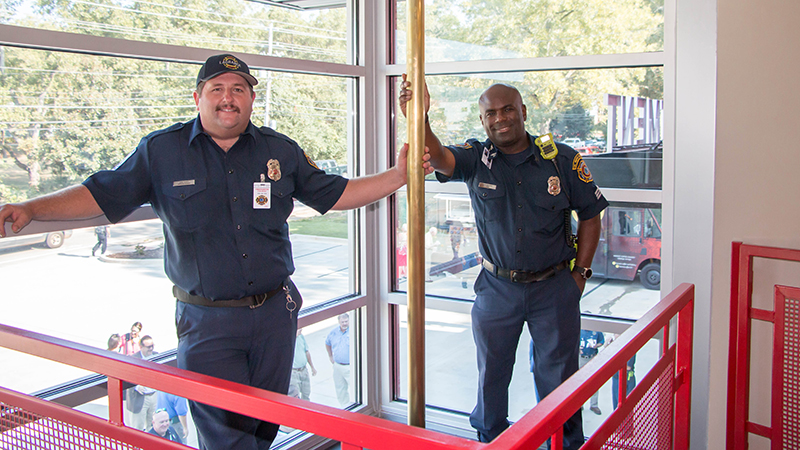 The sound of a call tone echoed the halls of the LaGrange Fire Department’s Station 5 for the first-time Thursday.

After a little more than a year of construction, the LFD unveiled and officially opened Station 5 on Vernon Road.

“We want to ensure that all citizens within our response district have a fast response time,” LFD Chief John Brant. “This had to be done in the planning phases with the new road that was cut through here to make this location possible. Everything worked out great.”

Brant said that over the next few months LFD will be able calculate how much they have improved by looking at reduced response times to a emergency call.

The Callaway Foundation and WellStar West Georgia Health helped secure the location by participating in a land swap. Then, the foundation donated the land to the city for the construction of the station.

“We are very excited about it,” Thornton said. “It will provide better coverage through mutual aid opportunities with the city and the county.”

More than 70 percent of the fire station’s construction was done through local contractors and funding.

“Of the 30 subcontractors that did work on the particular project, 22 of them were local,” Thornton said. “Of the $1.5 million that went into the construction of this facility, 1.1 million of that was employed with local contractors. That is something worth celebrating.”

This fire station was dedicated to a woman who made history within the LaGrange community.

“[She] spent most of her life in LaGrange, working to improve LaGrange, working for the betterment of all of our citizens,” Thornton said. “I am delighted today to honor Kay Durand, who is a former member of LaGrange City Council.”

Durand was the first woman ever to be elected to serve on the city council in LaGrange in 1989 and served for 10 years.

“Serving on the LaGrange City Council had to have been the most rewarding work I have ever done,” Durand said. “It also equipped me after my time after city council to do other things and I appreciate so much the opportunity the citizens of LaGrange gave me to serve on city council.”

Durand served on multiple other roles in the community and for the city, including being a trailblazer for the THINC Career and College Academy. She was also a pre-school teacher for 13-years.

“My favorite unit that we had was community helpers,” Durand said.

“There was not a child who did not love the firefighters. I frequently reminded the children of Mr. Rogers’ saying, ‘Whenever you see something bad happen, look for the helpers.’ That’s what these people are.”

Durand said she was proud to have her name associated with the good work that the LFD is doing to improve the community.  A piece of history moved into Station 5 when it was built.

“We also brought back the firefighters pole that was located in old Station 1 that was located on Main Street,” Brant said. “That is the most asked question when we do station tours, ‘where’s the pole?’ Our tours were cut in half when we got rid of our poles.”

Now, after being moved and stored in Station 2 for many years, the pole has made a comeback.

“Make sure you tell all the kids in the neighborhood that our pole is back, and they can come see it,” Brant said.

The state of the art design on the inside follows suite as well.

“We are pleased to have this new station and just are excited about it,” Brant said.