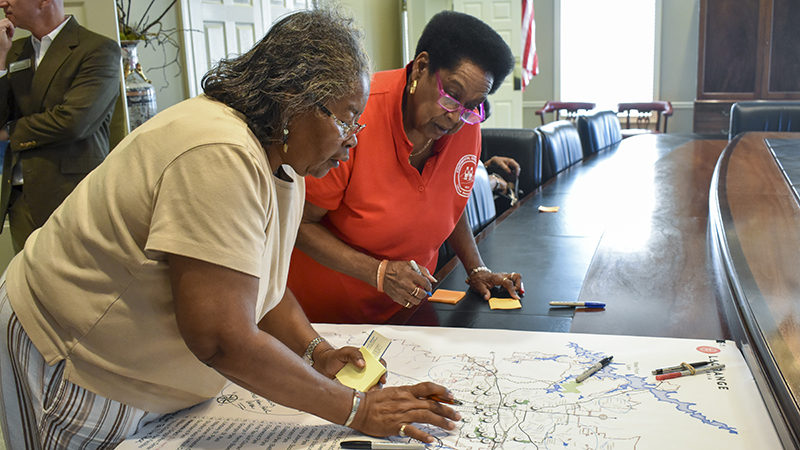 LaGrange residents conferred over a map of city parks on Thursday, discussing in some cases long-neglected parks and spaces that no longer serve community needs.

On Thursday night, a small group of residents gathered at the LaGrange-Troup County Chamber of Commerce to discuss the future of parks in LaGrange. The public input meeting for the city’s master park plan was open to the public, but only about two dozen citizens attended.

Attendees had the chance to mark some of the areas that they felt need the most attention, and one of the highest marked areas was a need for more special events. Others wanted additional programs for seniors, gardening classes, youth soccer programs and picnic sites at local parks. These reported needs add to the information already compiled by Barge Design Solutions. Barge will have a comprehensive plan available in eight months, breaking down everything from needed features to maintenance plans.

Mary Varva, senior planner and landscape architect with Barge Design Solutions, showed attendees some of the items that have proven to be popular in other cities.

LaGrange currently has 329.1 acres of park space (equating to roughly 10.3 acres per 1,000 residents), and Provost said the city has a good amount of space per citizen compared to other cities, making utilization of that space the focus.

According to information shared at the meeting, a survey will be sent out in November to solicit additional community input on what is needed in city parks. City Planner Leigh Threadgill said that she had already received calls from community members who were unable to attend the meeting outlining some of their hopes for city parks in the future.

“Anybody can reach out to me if they have specific feedback, but there will be a public survey launched in November,” Threadgill said.

Troup County will also hold a public meeting on its own separate, park plan later this year.