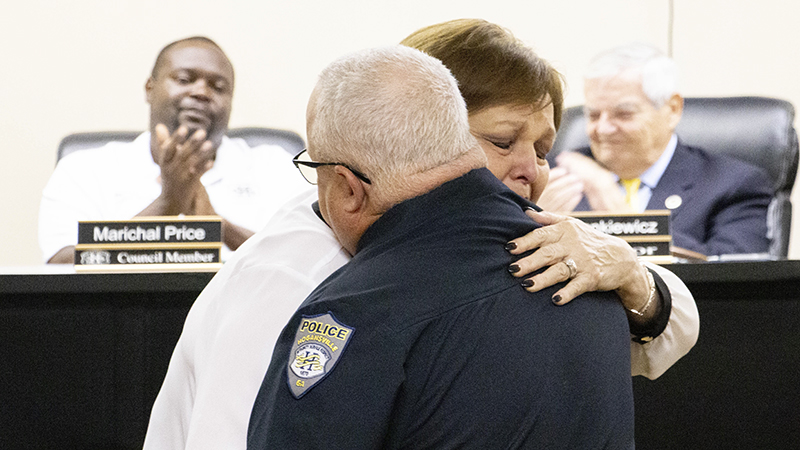 Hogansville Police Department Chief Brian Harr embraces Pamela “Kay” Smith, who was honored for more than a decade of service to the HPD. --Jenna Oden

There wasn’t a dry eye at the Hogansville City Council Monday night as a Hogansville Police Department city employee retired.

HPD Chief Brian Harr said that he wanted to do something that isn’t normally done for anyone other than officers.

He completed an end of watch call for Pamela “Kay” Smith, who has served the city for more than 10 years.

“After over 10 years of dedicated service to the Hogansville Police Department and the Hogansville community, Miss Kay Smith is 10-42 for retirement. We love her, we will miss her and she will always be family,” Harr said.

For the past 12 years, Smith has worked as a communications officer for HPD.

“It is a bittersweet time when you have an employee who is going to retire,” City Manager David Milliron said. “Kay has been the foundation over at the police department with communications and administrative work.”

Milliron attributes Smith’s success in HPD to her dedication and love for the community.

“Everybody knows her,” Milliron said. “Kay knows where you live and knows you individually. I can call and describe a house, and she will immediately tell me who lives there.”

Without Smith’s hospitality and outstanding customer service, Harr said he would not be chief.

“This lady is responsible,” Harr said. “Bonnie and I were riding around, and we were looking at three different cities that we could move to.”

Harr said he pulled up to the police station in “bummy” jeans and a t-shirt and when he walked through the front door and asked a simple question for Smith.

“Do you have a map I can have?” Harr said. “Hogansville was the only city I got to give me a map. My wife immediately said, ‘this is the place that we need to live.’”

Another employee was also recognized as the first employee of the month.

Milliron said they established this after an employee brought the idea and criteria for the award to the council.

“We have been working hard on the development on our staff … trying to grow our talent and their value,” Milliron said.

“This is all done strictly through the staff. They have their own bidding process, and they have to agree on who the employee of the month is.”

Charlie Landrum was selected as the first employee of the month for his hard work, great attitude in work and leadership skills.

“Charlie has been seen picking up trash in his own, personal vehicle off the clock, and he has been with the city for almost a year and has only missed four days of work,” said Public Works Superintendent Andy Jones.

“Charlie has learned a lot since he has been with us and strives to learn more, and even though he has a long way to go, he wants to put in the time and effort it takes to succeed. Charlie is a model employee and a great role model for other employees to look up to.”

According to Milliron, the criteria for the new award demonstrates the following will be eligible for the EOM Award:

In addition to these values, the EOM program will recognize those employees that show exemplary individual achievement, contribution, and performance in their jobs and other related duties beyond their own, to make the workplaces more efficient and more welcoming to co-workers and customers.

The EOM program seeks to acknowledge those whose efforts have inspired and supported the performance and achievement of others.

The EOM program will provide awards to such employees by a means that is fare, with the equal consideration of all eligible staff.