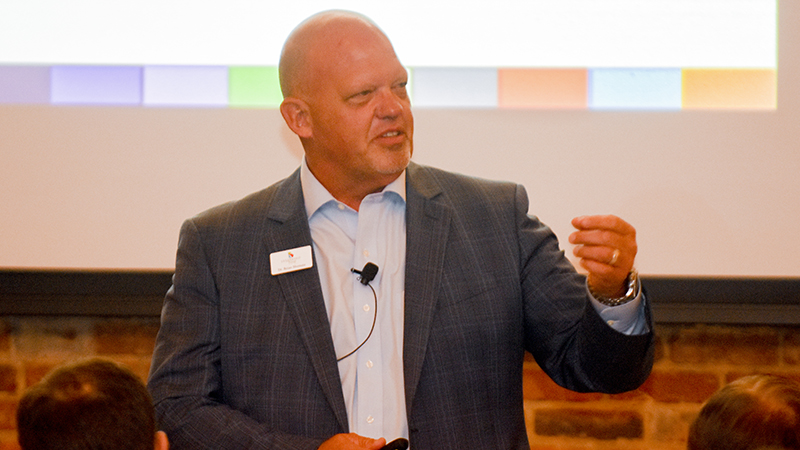 There are a lot of statistics and numbers out there about the Troup County School System, but Superintendent Dr. Brian Shumate presented all those figures in a way any Southerner would understand on Tuesday morning — using football terminology.

Shumate took over as superintendent of TCSS on July 1 and has been making his way around the county to present to various groups.

On Tuesday morning, he spoke at the LaGrange-Troup County Chamber of Commerce’s Early Bird Breakfast, giving details on the current state of the school system and laying out where he wants it to be.

“Would you accept 4-6 every year?” Shumate asked the crowd, referring to a poor football season.

“Coaches that go 4-6 every year in Georgia and in the South don’t last very long do they? This school district is 4-6. We are in the 40th percentile in the state of Georgia, and you’ve accepted it for a long time. At some point, we’ve got to get off that dime, and it’s going to take everybody in here to work with us to get there.”

Shumate used a presentation to show reading score numbers compared to nearby school districts and similar districts from around the state, and he did the same for graduation scores.

He used another football analogy from when he used to coach high school football to discuss the importance of simplifying things, noting how a simple offense often gets the job done better than a complicated one.

One of his big focuses early on has been getting all of his teachers and principals on the same page.

“We have to create district instructional coherence. I’m finding a lot of disjointed efforts right now. We’ve got three, four, five different reading curriculums, we have different reading assessments… we’ve got to work to do. We have a lot of elective classes, and we’re not focused on the Georgia standards for excellence.”

Shumate said he agrees to teaching to the test, since that’s how the school system is being judged.

“These Georgia standards for excellence are things you want your kids to learn anyways. Let’s get our kids ready and go compete,” Shumate said. “We’re tired of being 4-6.”

Shumate went through a long process before being selected as the Troup superintendent, but he made a point to say he chose the job too.

“I started looking at this community, the county, the economic development, the school district, the facilities, the kids, the test scores, you name it, and I thought this place was a diamond in the rough,” he said.

After his speech, Shumate was asked about the recent discussion on school property taxes. At last month’s school board meeting, a large group of citizens attended to speak out about the school taxes, asking that senior citizens no longer have to pay them.

Shumate said it was something the board was looking at.