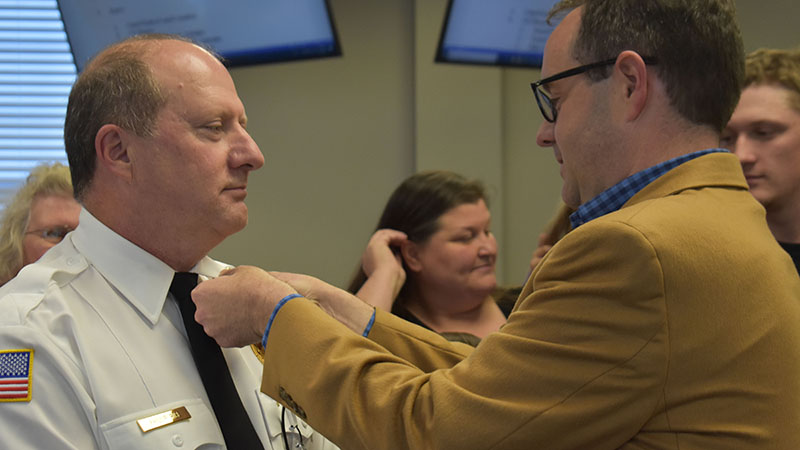 LaGrange firefighters lined the walls of the LaGrange City Council Chambers on Tuesday night, as the city took a moment to honor Deputy Chief Phillip Rice for 30 years of service to the city.

Rice is the shift commander for Battalion 2 of the LaGrange Fire Department.

“Thank you for all of your service, your dedication to the LaGrange Fire Department and all of the citizens of LaGrange,” LFD Chief John Brant said.

“You’ve been a leader in our department for 30 years. You’ve always set a standard and an example for everybody, through going back and getting your education and degree and how you carry yourself. You are a family man, and we appreciate everything you’ve done for us.”

According to information shared during the meeting, Rice began his career as a firefighter with the LaGrange Fire Department on Sept. 23, 1989. He completed Rookie School 18 on Nov. 17, 1989, and was the recipient of the Scholastic Achievement Award. He became certified as an Emergency Medical Technical in 1991 and was promoted to sergeant in February 1994. He was a member of the 1999 and 2000 Fire Department Muster competition teams that won state championships in back to back years. Rice also set the state record for the Georgia Fire Fighters Muster Association in the rapid dress competition.

In 2004, Rice became certified as a paramedic. He was promoted to lieutenant in October 2005 and captain in November 2006. He was appointed shift commander of Battalion 3 in 2009.

“[Thank you to] the men and women at the LaGrange Fire Department. It is not easy,” Rice said. “We have a tough business to take care of sometimes. They all do it with professionalism and first-class service.”

Rice thanked the mayor, city staff and City Manager Meg Kelsey for their support and leadership.

“It is quite an honor to have him be with us tonight to recognize him for his service,” Kelsey said.

Rice thanked LaGrange Police Department Chief Lou Dekmar, who was the public safety chief over both police and fire in the city until November 2018.

Rice also thanked his family for support. Rice and his wife, Nicolle, have six children, who attended the recognition. Rice’s mother, Helen, was also in attendance.

4THINC Academy CEO Gerald Wyatt introduced himself to the city council and spoke on some of his plans for THINC.

4The LaGrange City Council voted unanimously to approve an amendment to the probation services agreement to include a policy already in practice in the official wording, following a recommendation from the courts.

4The city council voted unanimously to authorize Mayor Jim Thornton and City Clerk Sue Olson to execute the Mill Creek Collateral Assignment. The agreement is expected to essentially let the developer’s bank know what the city’s position on an existing TAD agreement is.

4The city council voted to reschedule its second meeting date for December from the fourth Tuesday of the month, which would fall on Dec. 24, to Thursday, Dec. 18.