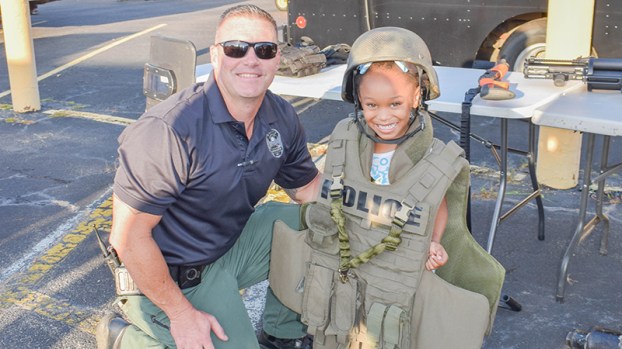 National Night Out brings community together

National Night Out on Tuesday was a chance for residents to meet law enforcement and featured flashing lights, lovable characters and fun activities.

Jackson Keegan, 5, said he was at the event “to see the firefighters.” It’s wasn’t his first time attending. Last year, he was dressed as a fireman.

Firemen were at the event, as well as police officers, health officials and representatives from public safety and service agencies.

“It’s a chance for people to interact with us, without it being a traffic stop or a call for service where they are the victim of a crime,” said Organizer Sgt. Marshall McCoy of the LaGrange Police Department.

McCoy said the event has two major goals — to let residents meet public servants before they need them and to allow children to feel comfortable around law enforcement.

“We let kids sit in the patrol car and look at everything. We want them to get that good feeling,” said Georgia State Trooper Brandon Smith.

Children also got to try on gear like protective vests and helmets at the Georgia Bureau of Investigation Crime Unit Van which, according to LPD Explorer Tyler McLean, was one of the biggest attractions of the night.

Explorers like McLean are bridge to law enforcement for young residents. It’s a program for students ages 14-21 who are considering a law enforcement career or who want to learn more about it. When they turn 18, Explorers become Cadets and have a paid position with the department. Explorers from LaGrange PD were at National Night Out for support and crowd control.

Members of the LaGrange Citizens Police Academy talked with attendees about the training they are receiving.

“It’s a 10-week course for adults. We do ride-alongs. We’re concerned about safety in the community,” Academy member Tameka Alexander said.

The Department of Juvenile Justice was at National Night Out discussing suicide prevention and human trafficking, as well as introducing residents to their services, which include assisting children who are in long-term facilities, as well as foster care for dogs.

Several non-profits and children’s advocacy agencies were on hand to meet with families. Bikers Against Child Abuse (BACA) work with kids who’ve been abused. BACA works with law enforcement and help empower kids to not be afraid when going to court to tell their story.

Candy Gibson was there with Safe Families for Children, a group that works with churches to find safe housing for kids in crisis.

“Maybe a parent suddenly went into the hospital, or was temporarily homeless, their children could be cared for until the crisis was over,” said Gibson, about Safe Families. “And our host families are not reimbursed. We want to get back to biblical hospitality, where we are caring for strangers and neighbors.”

Some huggable critters made the rounds of National Night Out. The Army Corp of Engineers had Buddy Beaver, who wore a life vest and shared about water safety. The Chick-Fil-A cow was shaking hooves, as was McGruff the Crime Dog. A new addition this year was Cell Phone Sally, at her first event to teach kids how to dial 911, and what information the 911 operator will need. She’s the creation of 911 Supervisor Tonya Massie and plans are to take Sally to events like these to help kids know how to interact with 911. The Jungle Bus was parked at National Night Out with its resident character, Jungle Jama, “a storytelling mama.”

Jungle Jama looks like she is on safari. She’s played by Nicole Kennedy, who works with the school system.

“We’re here in support of law enforcement,” Kennedy said. “We love coming to these events to share the love of reading.”

Each child who toured the Jungle Bus got a free book, and other literacy-related freebies like bookmarks and pencils. LaGrange College students were outside the bus reading stories to the kids. The students are part of the Wilkinson Family Servant Scholar program at the college, which promotes childhood literacy.

Members of the Marine Corps league were spreading the word about Toys for Tots, one of the many service projects they organize locally. They also help disabled vets in need of funds for rent, utilities, or medicine, according to member Johnny Griggs.

Drawings were held throughout the night for prizes. Kids got to ride a mini train, play carnival games and meet potential pets from the animal shelter.

“We have a lot of citizens here,” McCoy said. “They enjoy it every year. It’s the third year for some families.”

There are a lot of statistics and numbers out there about the Troup County School System, but Superintendent Dr. Brian... read more