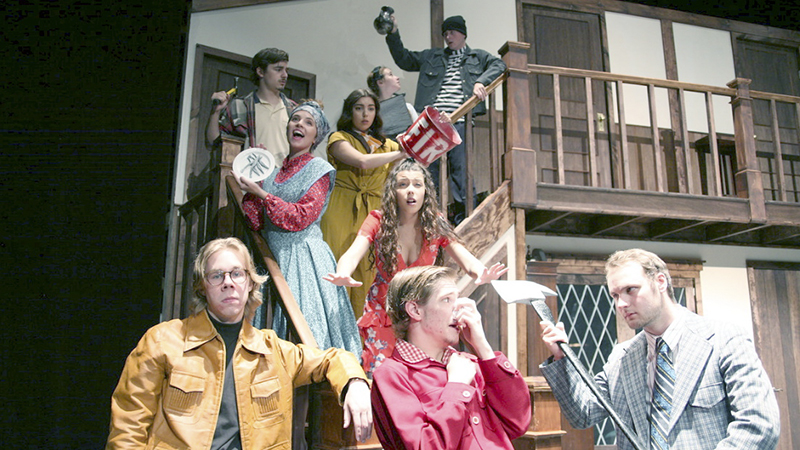 Often called the funniest play ever written, “Noises Off” comes to Price Theater this month.

Kim Barber Knoll, Coordinator of the Theatre Program and director of the show, said the British comedy was inspired by real life.

“Writer Michael Frayn got the idea for ‘Noises Off’ while standing in the wings during a production of a play he wrote for Lynn Redgrave,” Knoll said in a press release.

“The audience gets to see the process like never before.  It has all the elements of farce – lots of physical comedy, outrageous situations and over-the-top characters. There are surprises behind every door!”

Such is the utter chaos of “Noises Off,” a play within a play, said senior Musical Theater major Abigail Young in the release. “Noises Off” follows the misadventures of a British theater company trying to produce a farce called “Nothing On.”

“My character Dotty is the benefactor of the show,” Young said.. “She brought everyone together to do it, and she has a lot riding on it.”

What Dotty doesn’t expect are offstage relationships that flourish, then flounder, wreaking havoc onstage and backstage.

“Noises Off” is set in three acts that run in less than two hours – the first shows the cast in rehearsal the night before the play opens; the second is set after the play has been on the road for a month; and the third act bares the sheer bedlam that built up during four months.

“This is an intense, crazy and funny British farce,” Young said.. “We have a two-story set with lots of doors, windows and a staircase that are put to good use, with stunts everywhere.”

The LC cast bonded quickly during rehearsals, she said.

“You really had to,” Young said. “You have to trust each other because there is so much physical comedy involved. We all have to look out for each other.”

In addition to the challenge of learning stunts, the actors had to take on double duty.

“Every cast member actually has two roles,” Young said. “The first is their character in the play itself, then the character they are playing in ‘Nothing On,” the show they are producing. It’s been a real challenge learning how to go back and forth between two different people often with entirely different accents.”

Knoll said the cast has laughed long and hard during the seven weeks of rehearsal, and she hopes audiences will too.

“Our students are travelling to Americus on Friday for pre-screening auditions for the Southeastern Theatre Conference where they compete for professional jobs and interview for graduate schools,” Knoll said. “We cut a Friday night performance so the students would not miss this opportunity, but we added an extra performance on Sunday evening at 7.”

“It is not for children, no babes in arms.  In terms of language, one explicit word is used four times,” she warned. “If you need further information, call the box office.”

Email the box office to make reservations at priceboxoffice@lagrange.edu, or call (706) 880-8080 from noon to 4 p.m. weekdays. If emailing or calling, please leave name, the performance date/time and number of tickets desired, type of tickets and a call-back number and email address for confirmation.