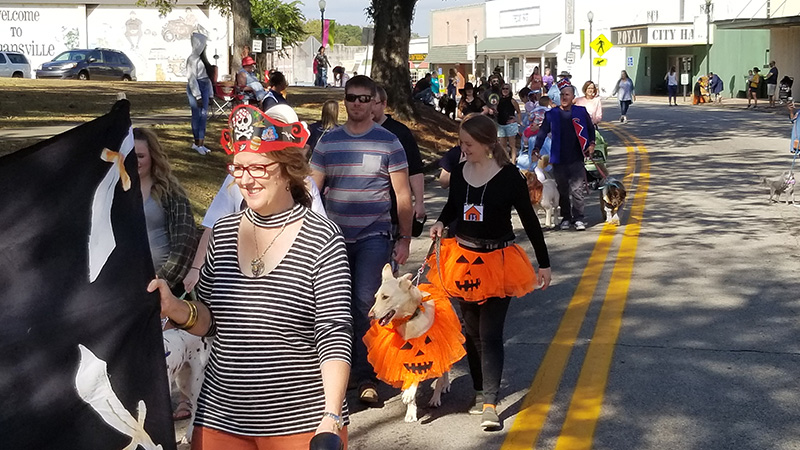 Furry friends and their owners took to Main Street in Hogansville on Saturday morning.

The third annual Hogansville How-O-Ween Dog Parade almost doubled its attendance in dogs and their owners this year.

“It went so great,” said Hummingbird Festival volunteer and parade coordinator Roseanna Prado. “Everybody seemed to have a great time. We had more than 50 dogs attend and all had such great costumes.”

The dog walk featured three judges that analyzed dogs and their owners in four different categories.

More than $150 was raised from the event and donated to the Hogansville Charitable Trust, a non-profit that takes care of city-scapes.

“I thought this event was excellent,” said Hogansville City Manager David Milliron. “We had more dogs and more participants. You can see it is growing, which really shows the community pride.”

This was the first year that the parade charged a fee, but Prado said that did not deter anyone from signing up.

“I’m very excited, because I think the first two years were a test to see if the public wanted it or the city wanted it,” Prado said.

“By the third year, it is a tradition. We really had a hand on the fact that people enjoyed the event. The charge was not a problem, and some people came from more than an hour away.”

Prado said everyone that came and participated all left with something, whether a prize or a great experience with friends and dogs.

Willow for best kisser, Nube Sordita for best behaved, Jiao Long for best costume, Sporti, Snowflake & Sheba for most original (the Wizard of OZ) and Lily for most like owner.

Kids get fired up at annual Citizen’s Day