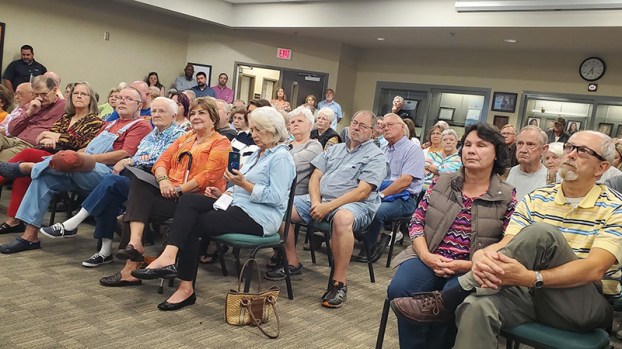 The public comment portion of Tuesday night’s Troup County School Board work session was longer than the rest of the meeting, thanks to a continued discussion on whether senior citizens should have to pay school property taxes.

In September, a standing-room only crowd filled the board room, with most in attendance rallying against school property taxes for senior citizens.

On Tuesday, a majority of the speakers spoke against a change in the school property tax, which makes up 62.5 percent of a property owner’s tax bill in unincorporated Troup County or the city of LaGrange.

Jackson said if the school system chooses to give a tax credit to senior citizens, he would be willing to pay extra taxes to help fund TCSS.

“I would encourage you to look into the data, determine how much this would cost the school system, and then present the option to Troup County citizens. If we do want to give a tax credit then we are going to be faced with raising the millage rate to equal that tax credit,” Jackson said. “Now is not the time to cut funding from our school system.”

Marcelene New spoke against the property taxes, saying senior citizens cannot continue paying school taxes. She also made a point to say that the issue wasn’t going away until the board makes a change.

“We intend to be at every board meeting,” New said. “… I would like to ask for a show of hands, right now, which board members will support elimination of all school taxes for senior adults? And if you would do that, I’d like to see your hand.”

The board did not respond to New’s question, following its policy on all public comments.

It’s the board’s policy not to immediately respond to public comments when presented, and Chairman Kirk Hancock read the entire policy before the start of the meeting. However, at the end — after all the speakers had their say — Hancock did make a brief statement, letting those in attendance know that the board plans to hold a question and answer session at a later date.

He also talked about the process involved in researching the school property tax, calling it “more complex” than even the board was aware of.

“That’s primarily because the data to make any informed decision is totally disaggregated,” Hancock said.

“That means Shane Frailey in the tax department has the appraised properties and a name. He does not have age or income. So anytime we try to find the right combination of funding any type of conditional homestead … that data is not available to us at this point.”

Hancock said the school system is hiring a firm that can take Census data, so they can model out what’s possible and what’s not possible.

“Right now, we don’t have that information,” Hancock said.

It’s unclear what the cost of a tax exemption would be to the school system since that will depend on the exact structure of the exemption.

However, previous comments noted it would likely cost millions of dollars annually out of the school system’s $114 million operating budget.

McAlexander spoke of the example his parents set for him, which was to support public education.

“They saw it as an example of truism that we all have enjoyed the shade of trees we did not plant and hoped that future generations would enjoy the shade of some they had planted,” McAlexander said.

He ended with a couple of questions before urging the board to ensure the school system maintains the same funding, regardless of any change in the property tax structure.

“If budget cuts are required to do it, where will they likely come — most likely I imagine from reducing the number of teachers? How will that impact student learning?” McAlexander asked. “… I would beg you, whatever you do, make it at least revenue neutral. Let’s not cut the legs out from under [Superintendent] Dr. [Brian] Shumate just as he is beginning to form his plan for doing all that we invited him here to do. Thank you for your time.”

Stankiewicz had a similar take, saying the millage rate would need to be raised to make up the difference in any property tax exemption.

“If in your wisdom, you designed to provide such a benefit to senior citizens, I deceit you to make such change revenue neutral,” Stankiewicz said. “That is to say the dollars lost to the school system from the exemption should be offset by an increase in the millage rate on all others. I would further suggest that a change is placed on the ballot for all voters to decide. We are at a critical point in the education system in this county. It would be a tragedy to deprive the system of the top of the dollars that are the very lifeblood of that system.”

Many others had an opposite opinion.

“I feel like I’ve paid my share,” said speaker Randy Coleman. “And I’d like all citizens over 65 have also met their obligation for paying school taxes.”

Coleman said he thought the rainy weather outside cut down on the expected crowd, though there were very few seats, if any available Tuesday night.

During his comments, Hancock expressed the need to do it right and asked everyone to bear with the board as it worked through the process.

“What we come up with, it’s got to be sustainable, because we know whatever is given can rarely be taken back. So to get it and to get this right, it’s going to take a little bit of time, and we will be open and transparent,” Hancock said.

“If you followed the selection process for Dr. Shumate, it was radically different than what had been done in the past. That’s the spirit of this board, so bear with us.”

Thyeasha Joseph normally spends her day as a process engineer for Kimberly Clark, but she recently took some personal time... read more