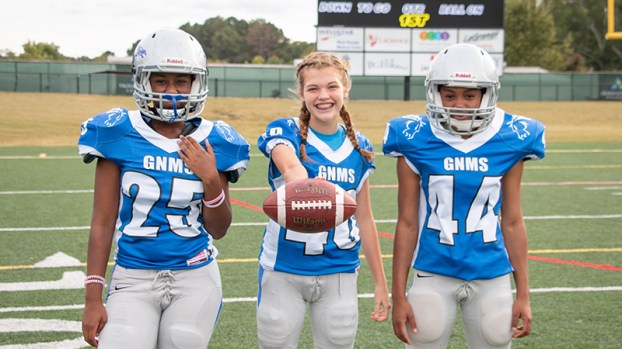 Football is mostly a boys’ only club, but there’s a noteworthy exception to that at Gardner Newman Middle School.

Three members of the Gardner Newman football team are girls, and they were with the team through summer workouts, all the way to the final game of the season last week at Callaway Stadium.

Carlee Roland is a kicker, Breyanna Leonard is a safety, and Mikeiya McCants is a lineman, and they’ve enjoyed the experience of playing a sport that is generally the exclusive domain of boys.

“I was nervous, but then I was excited,” said Leonard, who played in one game this season. “It’s been fun.”

For Roland, it was an opportunity to step miles outside of her comfort zone.

“It’s definitely a new experience, and I never thought I would do this, but it’s been fun,” she said.

The first of the three girls to give football a try was McCants, who joined the team late in the 2018 season as a seventh-grader.

McCants remembers making her debut in a game, and the first play could have gone better.

“They called my name and put me in, and I got out there, and first thing I messed up because I was nervous,” she said.

It may have been an inauspicious start for McCants, but she hung with it and has been a key member of the team.

McCants has played in a handful of games this season, and she doesn’t shy away from the contact that’s such an integral part of the sport.

“It was like the hits didn’t even hurt,” she said.

McCants remembers one satisfying moment from this season when the players from the opposing teams were shaking hands after a game.

“We took our helmets off and they said ‘What? We got beat by girls’” Leonard recalls, grinning at the memory.

One person who is whole-heartedly in the corner of the three girls is their head coach, Marcus Blandinburg, who encourages anyone interested in football to come be a part of the team.

Blandinburg, who led Gardner Newman to a successful season, welcomed the trio of girls onto the squad with open arms.

“They came up to me, and my thing is I give everybody the same opportunity, whether they’re a boy or a girl, blue, black, yellow, green,” Blandinburg said. “I told them it was going to be hard, and I push them. There’s no slack. They accepted the challenge, and they passed the challenge.”

Football, Blandinburg noted, is helping each of the girls in a specific way.

“They all had different goals, and that’s why they’re doing it,” Blandinburg said. “Mikeiya, she wants to go into the military. She wanted to get into something that would push her, and get her into training early, so when she gets to that point, she’s ready mentally. Carlee Roland, she’s a soccer player, and she wanted to enhance her kicking. Breyanna, she runs track, so she wants to work on her speed, so they all had different goals.”

Having them on the team, Blandinburg added, has “been amazing. They work with the boys, and they do it all.”

McCants was the trail-blazer among the three girls, and she put the shoulder pads on for the first time last fall.

McCants decided she wanted to play football, so she showed up at practice one afternoon, something her parents didn’t find out about until that night.

“I didn’t even tell them,” she said. “I just went to practice. I texted my mom and said I was staying after school. She didn’t know what I was doing. She said OK. She came to pick me up and said why are you so sweaty and look like that. I said because I tried out for football. She said OK, girl power to you, then.”

McCants will soon make the transition to high school, and she wants to continue playing the sport, although she acknowledges that’s “going to be challenging.”

“They asked us if we want to continue doing it, and I was like yes,” she said. “I want to go into the military, and I want something that’s going to push me.”

Leonard, encouraged after seeing another girl join the team, decided to take the leap herself.

“I always wanted to play football since elementary school, and (McCants) inspired me to play this year,” Leonard said.

Roland, who has a soccer background, is strictly a kicker, and she has helped fill a void the team had coming into the season.

“They needed a kicker, and they asked me,” said Roland, who made four extra points in a win over Valley. “At first, I thought (Blandinburg) was joking, but he said no, I’m serious, and so I went out to the tryouts, and they said I was their new kicker.”

The one caveat for Roland was that if she was going to play, she’d have to avoid contact, which is possible for the kicker.

“My mom, at first she didn’t want me to do it, but my dad talked her into it and got her convinced that I wouldn’t get hurt,” Roland said. “We have gone through the precautions that I won’t be getting hit.”

While being on a football team is clearly a new experience for Roland, her time as a soccer player did help make the adjustment an easier one.

“I play a lot of soccer, so I’ve got a lot of strength in my leg from that,” she said. “It helped me kick the football.”

Football, Roland added has “brought me farther than I ever would have thought.”

Roland appreciates the way she and the other girls have been welcomed by her teammates, and she warmly recalls the reception she received when she made her first appearance in a game.

“My first time going out there, it was cool because they all clapped for me,” she said.

Whether more girls will opt to don a pair of shoulder pads and a helmet remains to be seen, but McCants is hopeful that anyone who wants to play football will set aside their reservations and give it a try.

By KEVIN ECKLEBERRY Daily News Football games, it’s been said, are oftentimes won on the line of scrimmage. If that... read more