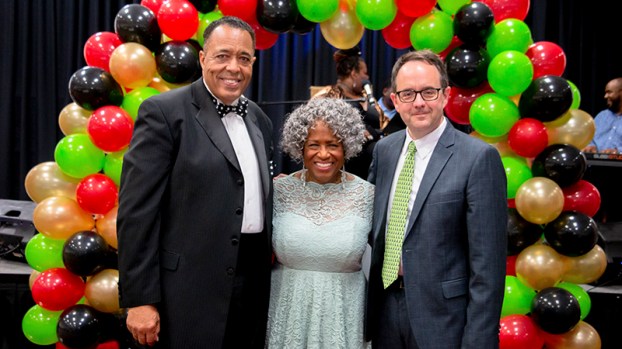 Over the weekend, the LaGrange community honored the 400-year anniversary of the first slave ship arriving to America in 1619.

The project was coordinated by Ark Refuge Ministries in LaGrange. The 400 Year Journey, the first annual celebration of the journey from 1619 to 2019, was established to commemorate the struggles, influence and contributions made by African Americans during the past 400 years. More than a dozen workshops were held throughout the weekend that promoted relationships amongst a diverse group of people.

“Tonight, I think we can reflect on how far we’ve come and the next steps along the journey,” said LaGrange Mayor Jim Thornton at the commemoration dinner Saturday night. “I’m hoping that you will take the opportunity to be here tonight to reflect upon how you as an individual can participate in our racial trust-building initiative, how you can work as an ambassador for diversity. How you can work for the expansion of liberty and expansion of opportunity in this community?”

LaGrange Police Chief Lou Dekmar introduced the event’s Mistress of Ceremonies Monica Kaufman Pearson, who is the first woman and first minority to anchor the daily evening news in Atlanta.

“My husband John and I are very honored to be a part of this celebration,” Pearson said.

“’We have come this far by Faith’ was a song written in 1956 by Alfred Goodson, who was the minister of music at fellowship Baptist Church in Chicago, Illinois. He understood the importance of leaning on the Lord because he has never failed us. For that, we always give thanks, but not only have we come so far in 400 years, but we also have so much that we have received during that time.”

Pearson has won more than 33 Southern Regional and local Emmy Awards for her work as a journalist.

“We as people have been transformed, and here in LaGrange, Georgia, Troup Transformation has done just that for the city and the citizens,” Pearson said. “Wanda Walker is the founder, but she also gives her time to many community boards, coalitions and counsels. Among them, the 400 Year Journey task force because she loves seeing people come together to celebrate.”

Dr. Joseph Green, who was scheduled to speak on the history of the 400 years’ commission, was unable to attend the event.

In October 2018, Green was congressionally appointed to the United States 400-Year African American History Federal Commission and is the head pastor of Antioch Assembly in Pennsylvania, a facilitator of cultural intelligence training and vice-president of the Interdenominational Minister’s Conference.

Walker said she was able to interview him to keep his speech a part of the event.

“There were several significant things that he [Green] shared with me, and I want to share them with you,” Walker said. “First of all, he said, in the Bible, the Jewish people were told that they would be dispersed into the different nations. He said that the people who were brought over on the first slave ship were decedents of Israel who had gone into Africa.”

Walker referenced the book of Deuteronomy, where the Israelites would be taken into slavery by ship.

“The only time the people were taken into slavery by ship is when people were brought to America,” Walker said. “God promised that he would bring them out of slavery, and there would be a transference of wealth. Dr. Green believes that just as the Israelites were brought out of Egypt after 400 years of slavery, that God is about to repeat that pattern in history. African Americans have great things in store for them, including the transfer of wealth.”

Dr. Willie T. Edmonson, who is a lifelong resident of Troup County and City of LaGrange councilman, spoke as the keynote address during the evening. He referenced people and events that made an impact throughout his childhood, including many stories about the struggles his grandparents had to face as African Americans.

“I consider myself a very blessed individual because I was fortunate to attend an all-black elementary and black junior high school [Ethel W. Kight],” Edmondson said.

“In the early 1960s, I was able very fortunate to be a part to see my first president [in person]. The whole school was let out, and we were able to walk up to Lee’s Crossing. We were able to see President John F. Kennedy. That still resonates in my mind today. Those were just a few of the sweet moments that I can remember.”

Edmondson accompanied sweet memories with bitter ones as well.

“I remember 1969. We heard about forced integration, which would transfer us to an all-white school,” Edmonson said. “Little did we know instead of gaining a better education, we lost our identity. When we went to the new school, we were all apprehensive. We were told different myths about the white children.”

“We were devastated at the age of 14-years-old,” Edmondson said. “I, along with two other teenagers, decided that enough is enough. So, we organized our first march going from Ethel W. Kight all the way downtown to the courthouse.”

The school’s name was changed again in 1986 to Lee’s Crossing Middle School, which it remained until it was again named back to Kight in 1996.

Edmondson said he still remembers every little detail about the segregation that occurred during his time growing up.

More specifically, Edmondson said he remembers the hospital that was segregated, where he later become a nurse.

“We have come a long way, but guess what? We still have a long way to go,” Edmondson said.

Work of Annie Greene honored as part of 400 Year Journey

On Friday night, the work of acclaimed yarn artist Annie Greene was honored as the kickoff event for the 400... read more